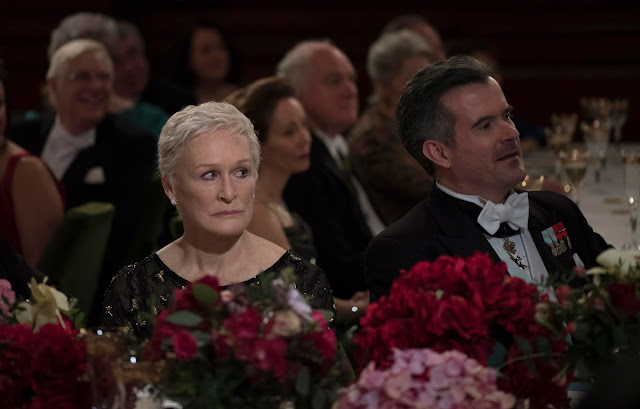 There is a moment about two thirds of the way Björn Runge's The Wife in which Joan Castleman (Glenn Close) watches from the audience as her husband, Joe (Jonathan Pryce) receives the Nobel Prize for literature, an award that by all rights belongs to her. The camera holds focus on Close's face for a short time, registering the conflict roiling beneath the surface as she tries to hold it together for appearance's sake, but then quickly cuts back to a wide shot of the ceremony, pulling back as the crowd erupts in applause, the moment taken from Close to focus on the man receiving the award for her work. 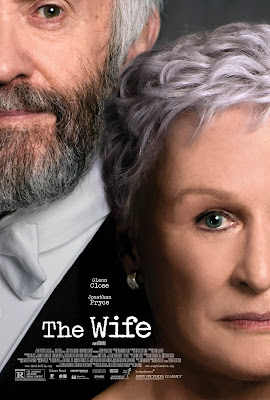 Much like the characters in the film, the scene robs Close of an important moment. One wishes that Runge had taken some inspiration from Jonathan Glazer's Birth in that moment, and allowed the camera to stay on her face, taking in every moment of rage and heartbreak bursting forth from beneath her stoic countenance. This is scene is about her character, and even if it was a thematic choice, it seems counterintuitive to the film's dramatic arc.

Close is, of course, extraordinary as Joan, the long-suffering wife of a "literary genius" who in fact has served as little more than her copy editor for decades, taking all the credit for her work out of perceived necessity in a male-dominated world where men pat each other on the backs for mediocrity but consistently fail to recognize female genius. For years she has lived quietly out of the spotlight, content with her place in the shadows, until her arrival in Stockholm for the Nobel ceremony. There, everything begins to unravel, as decades' worth of resentment comes bubbling to the surface. And yet, even in a film called The Wife, Pryce's character seems to take center stage. If Runge is attempting some sort of meta-textual commentary here, it comes off as a grave dramatic misstep, consistently pulling focus away from Close's simmering performance when the film should really be about her point of view.

Instead we are treated to tales of Joe's infidelities and their unbelievably whiny man-child of a son's petulant insistence on being recognized for his writing talent, even when it becomes clear that his mother is the true literary genius of the family. It then seems to absolve Joe's sins in the final act without ever really dealing with them in a satisfying way. The ending feels like a bit of a cop-out, avoiding the film's thorniest themes when it seems to have nowhere else to go.

And yet through it all, Close holds her head high and delivers one of her most indelible performances. The film around her may be a tepid melodrama that doesn't seem to know what to do with its subject (or with her as an actress), but Close is extraordinary - restrained when she needs to be and fiery at just the right moments. Just give her a damn Oscar already. She has proven her mettle over and over again, and in The Wife she is a marvel of barely contained heartache and rage. How ironic would it be for her to lose yet again for a film in which she plays a woman who has never been given her due? Close certainly deserves better than this, but the film is worth seeing for her alone. She's a force of nature in a film that seems content to be a meek whisper in the presence of giants.