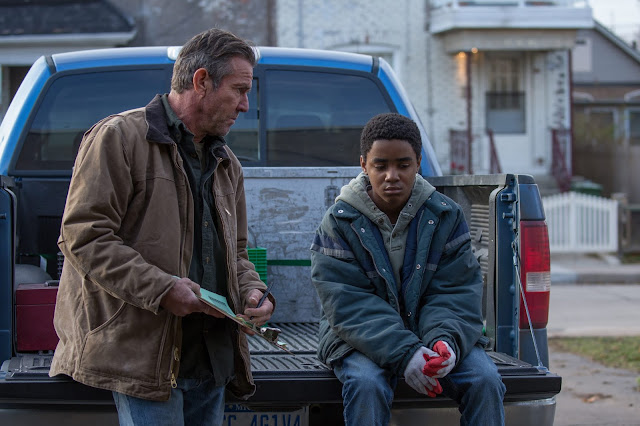 A young boy discovers a mysterious alien weapon in an abandoned factory in Kin, the debut feature from sibling directing team, Jonathan and Josh Baker. Yet despite this science fiction hook (upon which the films marketing leaned heavily), the film is more of a family drama than a sci-fi adventure, using its sci-fi elements sparingly as support for its story and its characters rather than the other way around. 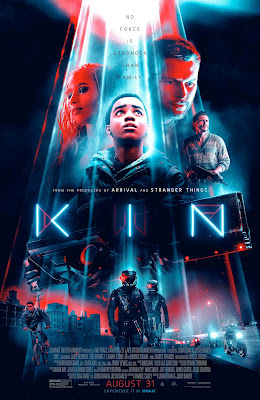 The boy at the film's center is Eli Solinski (a promising Myles Truitt), adopted son of strict, no-nonsense construction worker, Hal (Dennis Quaid, in his second grumpy dad role of 2018 following I Can Only Imagine). Hal's biological son, Jimmy (Jack Reynor) has just been released from prison, and is already in trouble with a local gang lead by Taylor Balik (James Franco), who threaten to kill their family unless Jimmy coughs up $60,000 for protection while behind bars. On the run from both the gang and two mysterious figures searching for Eli's unusual space weapon, Eli and Jimmy meet Milly (Zoë Kravitz), your typical hooker with a heart of gold, and mend broken family connections to form new and inseparable bonds.

Kin feels like something out of the 1980s - kid finds an alien weapon and goes on the run with his brother, blasting his way out of tough situations while being pursued by ruthless gang members and masked aliens. But the Baker brothers keep the sci-fi elements subtle in favor of a kind of gritty realism that positions the characters front and center. It's a slow-burn, to be sure, keeping the weapon's true power hidden for a good part of the film, only pulling it out when the pacing starts to lag. But there's something agreeably old fashioned about the way the Bakers choose to deliberately build their story and their characters without leaning too heavily on the fantasy elements of the alien Macguffin that gets the story rolling.

It's a throwback with a contemporary twist, a film with a modern look (shot in drab shades of gray interspersed with dazzling pops of color) featuring old school storytelling sensibilities. It doesn't always work, and the film's momentum occasionally suffers from its slow pacing, but the Bakers have an undeniably sharp visual sense, crafting some spectacular shots by contrasting neon lights against an otherwise monochrome color palate. Kin also gets great mileage out of the natural charisma of its young star, Myles Truitt, as a black boy raised in a white world who begins to discover his heritage and identity in surprising and symbolic ways.

While the film's conclusion feels a bit contrived and ultimately unsatisfying, the lead-up to the climax feels like a prelude to something much bigger and better for Jonathan and Josh Baker. Kin is clearly the work of talented filmmakers with unique sensibilities, but it ultimately paints itself into a dramatic corner from which it never quite figures a way out. Yet the seeds of something special are evident in every frame. The Bakers are promising talents worth keeping an eye on, and Kin is a solid stepping stone hopefully paving the way to bigger and better things.