The racial politics of Sayonara, which were quite progressive in 1957, may not have aged particularly well by 2017 standards (hello yellow-face Ricardo Montalban), but it's hard to deny that its heart was in the right place. In fact, its tale of interracial romance still feels a bit revolutionary. While such things are more commonplace now, if the past year has taught us anything it's that we haven't come nearly as far as we thought.

Marlon Brando stars as Major Lloyd Gruver, a southern-fried career Air Force officer who decides to take some leave time from flying combat mission in the Korean War in Kobe, Japan. There, he discovers that one of his men, Joe Kelly (Red Buttons, in his Oscar-winning film debut), is planning on marrying a Japanese woman named Katsumi (Miyoshi Umeki, also taking home an Academy Award) that he met while stationed there. Gruver objects to the union, and American military policy at the time discouraged such unions without outright forbidding them, although American GIs were not allowed to bring their Japanese wives back to the States with them. 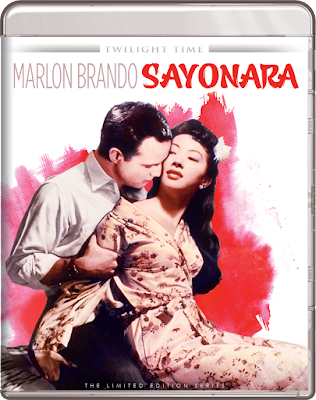 Despite his objections, Kelly convinces Gruver to be his best man, and the more time he spends around the couple, the more he begins to understand how their intense love trumped the social mores of the time. He begins to realize that his own relationship with his girlfriend, Eileen (Patricia Owens), feels less like passion and more like obligation to duty. Gruver, the son of a four-star general who has always stuck to the rules, soon finds himself in love with Hana-Ogi (the magisterial Miiko Taka), a Japanese Matsubayashi performer who is forbidden from consorting with men. Together, the two face prejudice on both sides, from an American military rife with racial prejudice, and a strict Japanese culture that still does not trust the Americans in the aftermath of WWII.

Sayonara was nominated for 10 Academy Awards (winning four, for Supporting Actor, Supporting Actress, Art Direction, and Sound), and remains a sumptuous Hollywood production of the highest order. Brando is fantastic, as always, changing his character from James Michener's novel to be southern, strengthening the message about racial equality because a southern man saw the error of his ways. It's a surprisingly respectful depiction of Japanese culture (Montalban's yellow-face performance aside), treating its characters with dignity and its subject matter with the seriousness it deserves.

Yet It never comes off like a preachy "issue movie." Brando's intensity betrays the vulnerability of a man whose entire social order comes crashing down in the name of love. He and Taka create a memorable pair of star crossed lovers, and Buttons was never better than he was here; quiet, unassuming, yet steely, determined to marry the woman he loves no matter the cost. Beautifully shot in striking Technicolor by Ellsworth Fredericks (Invasion of the Body Snatchers), who memorably captures the haunting grandeur of post-war Japan, Sayonara is a sweeping Hollywood epic whose focus remains disarmingly intimate. The world may have moved on from its more simple take on race relations, but it's still startling relevant today. This is Golden Age studio filmmaking at its best, featuring memorable characters, grand scale set design, and lush cinematography, but it's all in service of a strong and resonant story, made even more so by a cast of world class actors on the top of their game. It's an overlooked gem from the era that's ripe for rediscovery.