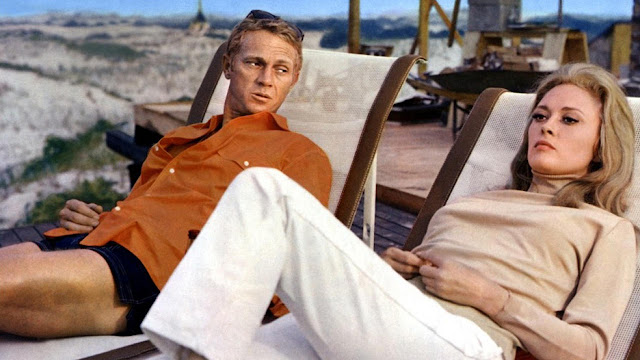 Norman Jewison's sleek and stylish 1968 thriller, The Thomas Crown Affair, may not have necessarily been the career high point for anyone involved, and while some of its stylistic tics may not have aged particularly well over the years, it is not without its charms. 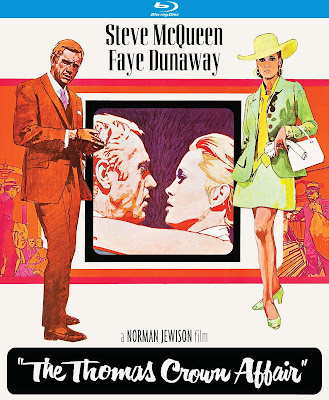 It's hard to go wrong with actors like Steve McQueen and Faye Dunaway front and center. McQueen's titular businessman, Thomas Crown, is a smooth operator who grows bored with the honest riches of his work and decides to mastermind a bank heist. Dunaway's Vicky Anderson is the beautiful insurance investigator sent to crack the case. She's onto Crown almost right away, but can't help but be drawn to the mysterious and charming crown. She knows he did it. He knows she knows he did it. What ensues is a delightfully seductive game of cat-and-mouse, resulting in what is perhaps the sexiest game of chess ever played on the silver screen. McQueen and Dunaway move their pieces around the board, Dunaway slyly fingering the bishop while McQueen makes eyes at her from across the table.

It's moments like these that make The Thomas Crown Affair work. Jewison's direction is nothing if not stylish, utilizing split-screen to stage the opening heist in undeniably thrilling fashion. The rest of the film, however, is often hit-or-miss, it's weak plot glossed over by the presence of its attractive stars. It's got beautiful people behaving badly then falling in love, but it's also riddled with plot holes and shortcuts that keep it from living up to Jewison's bold craftsmanship.

Yet despite its weaknesses, it's hard to resist McQueen and Dunaway, who elevate the pulpy and somewhat thinly drawn material with their strong performances. The new 4K restoration showcased on the upcoming Kino Blu-Ray is dazzling, and gets more so as it goes on (the opening sequence still seems strangely faded). Its luster may have dimmed over the years, but one thing that remains immortal are McQueen and Dunaway, two of cinema's brightest stars making the most out of middling material, and The Thomas Crown Affair is made worthy almost by their presence alone. Jewison was no slouch, but he would go on to make much better films, less hampered by trendy stylistic affectations.