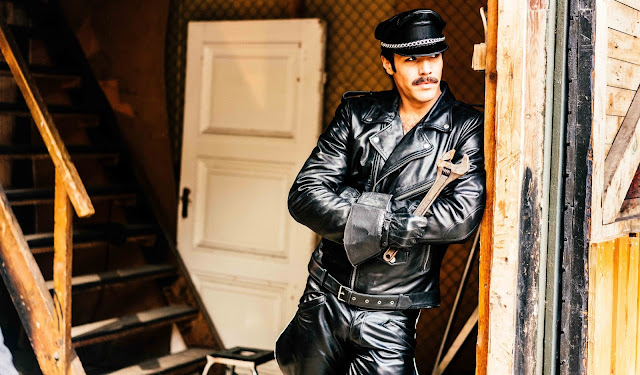 Laaksonen (Pekka Strang) discovered his sexuality as a young man during WWII, when sex-starved young soldiers cruised the woods looking for sex with other men. Those days left a powerful impression on Laaksonen, but he was especially haunted by the cold, dead eyes of a young Russian soldier he killed, who visage came to play a powerful role in his art. Fascinated by the male form, Laaksonen began secretly drawing sexually explicit cartoons that soon got him in trouble with Finnish authorities of the time. Forced to hide his sexuality during the oppressive sexual climate of the 1950s, he lived a quiet life out of the spotlight, before his drawings took on cult status during the sexual revolution in America, turning him into the cult figure he is today. 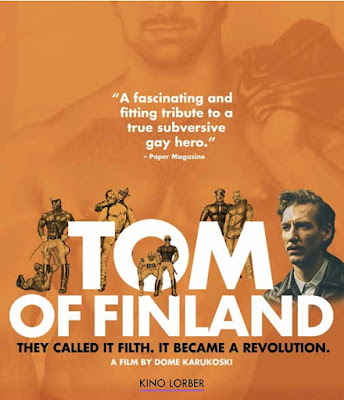 Tom of Finland begins awash in muted colors and drab, conservative costumes. As the film progresses, the cinematography becomes brighter, the costumes more flamboyantly colored, representing Tom's journey out of the closet and into the public eye. There's a certain beauty to its symbolic flowering, as he and his lover, Veli (Lauri Tilkanen) dream of a time when they can finally hold hands in public and be who they were meant to be. It's an inspiring story, and director Dome Karukoski tells it well, as Tom helped usher gay sexuality out of the closet and into the mainstream eye, celebrating the masculine power dynamics rather than burying them out of shame. But one can't help but feel that such a radical artist deserved something a little more, well, radical. Tom of Finland is the kind of respectable, Oscar-bait picture that is so common among biopics, shying away from the hardcore sexuality that so dominated Laaksonen's art.

I've been critical of those who suggested that Call Me By Your Name didn't feature enough sex or nudity, because I don't think that the story necessarily required it in order to have the emotional impact it did. But Laaksonen celebrated unbridled desire, revealing in oversized erect penises, rough anal sex, and practically gave birth to kink as we know it. For the film to gloss over that seems a disservice not only to Laaksonen's art, but to who he was as a person. It would be like erasing overweight women and giant breasts from a biopic of R. Crumb.

The film itself is perfectly respectful, even moving. But it's difficult to ignore the fact that it just doesn't really capture the subversive beauty of what Laaksonen did. It doesn't need more nudity for purposes of titillation (although titillation is part of the whole point of Laaksonen's art), but to capture the spirit of sexual openness that Tom of Finland championed and represented for so many. Instead, it's a mild mannered biopic rather than a true representation of the artist it depicts, venerating but ultimately neutering its delightfully rebellious subject.