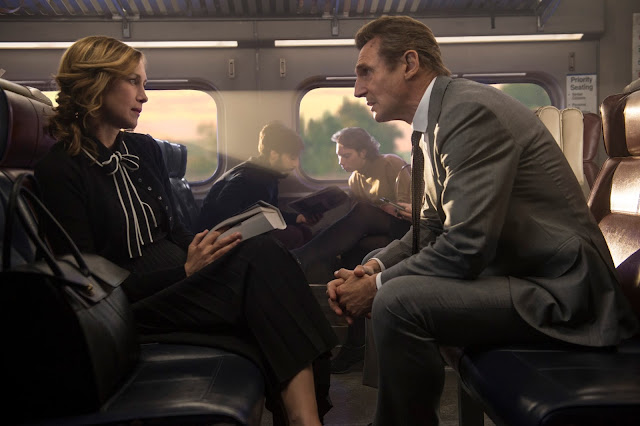 No other filmmaker has quite captured the heroic middle class ethos of Liam Neeson quite like Jaume Collet-Serra. Collet-Serra, who also directed Neeson in Unknown (2011), Non-Stop (2014), and Run All Night (2015), has a keen understanding not just of Neeson the actor, but of Neeson the icon, and he deftly harnesses that image, weaponizing it into a symbol of working class angst raging against the machine.

Their latest collaboration, The Commuter, is nothing new. Neeson,  one time cop-turned-insurance salesman whose humdrum routine takes him on a commuter train into New York City every day. That is until he is laid off in typically soulless fashion; 60 years old and five years from retirement, he suddenly finds himself facing unemployment and unimaginable debt left over from the 2008 economic crisis. Unable to bring himself to tell his wife (Elizabeth McGovern), he heads back to the train to take one last journey home. Things are looking pretty bleak, until he meets Joanna (Vera Farmiga), a mysterious woman who offers him $100,000 if he just does "one little thing:" find a fellow commuter on the train and tag them with GPS unit. He can walk away clean, $100,000 richer, never knowing what happens to them. 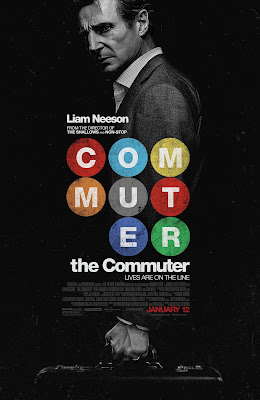 The offer is tempting for a man who just lost everything, and he begins to search for the mysterious passenger. But as he gets closer and closer to the truth, he begins to realize that he is in over his head, and that the people he is working for are willing to do anything to keep their secret, even if it means killing every single passenger on the train.

The Commuter is not great art; nor is it trying to be. It's a very familiar dish that Collet-Serra and Neeson have served up before. This time, however, everything is dialed up to an 11; almost as if it's a parody of late-period Neeson action films. Collet-Serra understands the inherent ridiculousness of the plot, and rather than try to pass it off as something it isn't, he embraces it with reckless abandon, throwing in gratuitous explosions, fist fights, outlandish stunts, and one truly outstanding single-take action sequence. Cinematographer Paul Cameron, who also shot Michael Mann's gorgeous Collateral and Tony Scott's Man on Fire, captures the sequence with such flair; tussling bodies breaking both the the visual plane and the confines of the passenger car, blows raining down like hailstones; it's easily the most dynamic and thrilling sequence to come from the Collet-Serra/Neeson collaboration thus far.

Neeson, whose craggy face is looking more lined than it has in the past, can still deliver a beating like no one else, growling about his family and taking on the bad guys with down-to-earth, everyman righteousness. This time, however, his struggle against a faceless entity reflects his own financial struggles. He's just a regular guy who has put in decades of work only to be screwed over by soulless corporate executives that he will never meet. 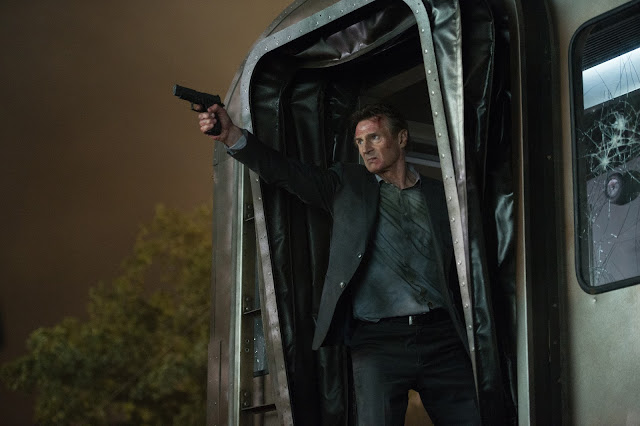 That's why I believe Neeson's films resonate with so strongly with audiences:  he represents a kind of "Average Joe" fighting against circumstances outside of his control, a struggle that is all-too-familiar to the ordinary, working class citizen. There's no one else who could make a line like "On behalf of the American middle class, go fuck yourself!" work better Neeson, but he speaks for the forgotten men and women of American better than Donald Trump ever will.

Neeson has said that this will likely be his final action movie. After all, he's 65 years old, and his exploits are becoming less and less believable with each passing film. But believability has never been the point of these movies. They have always been about the everyman triumphing against the greater forces that seek to control his life. There's something essential in that fantasy, I think, and a major part of why Neeson is the major star that he is. People come to see his "particular set of skills" in action, fighting for his family and for a chance to take control of his own life in a world run by bigwigs who could care less about the little guy. Neeson stands up for the little guy, and no other filmmaker gets that quite like Collet-Serra, who boldly embraces that working man fantasy with a sly wink. The Commuter is over-the-top, outlandish, and often downright silly. But it strikes a chord for anyone who's ever felt at the mercy of an unfeeling system. Liam Neeson is the hero we need, and I hope his collaboration with Collet-Serra continues for years to come.