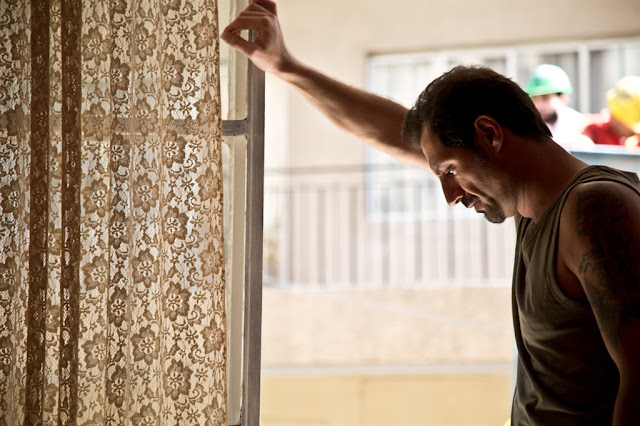 It's hard to overstate the complexity of the geopolitical situation in the Middle East. Tensions between the Palestinians and Israelis, not to mention the Christians in the region, have been raging for almost all of recorded history, an issue further exacerbated in the 20th century as conflict over land rights and the lack of a Palestinian state lead to widespread violence. To detail all the intricacies of the conflict here would be a fool's errand, but Ziad Doueiri's The Insult brazenly attempts to boil centuries of history into one disagreement between two men, with decidedly weak results.

The Insult, which is Lebanon's official foreign language entry to the 2018 Oscar ceremony, is such a gross oversimplification of a complex and layered issue that it's almost offensive. Yasser Abdallah Salameh (Kamel El Basha) is a Palestinian contractor who lives in a refugee camp in Lebanon. One day while attempting to fix a gutter belonging to Tony Hanna, a Lebanese Christian, Tony (Adel Karam) refuses the repair, smashing the new gutter with a hammer, spilling water all over Yasser. Yasser responds naturally, calling Tony a "fucking prick." Outraged, Tony demands an apology, and when Yasser refuses, takes his complaint to Yasser's employer. Yasser finally relents, but when he goes to apologize, Tony tells him that he wishes that Ariel Sharon had wiped out all the Palestinians. It is at that point that Yasser truly loses his temper, punching Tony in the gut and breaking two of his ribs. 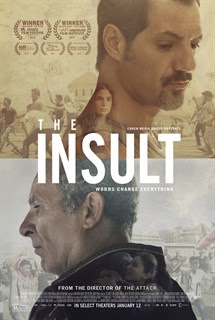 The conflict only escalates from there, heading to the courts, with both men refusing to back down out of pride. It is a conflict of words that escalated to violence, and the Palestinian and Christian communities in Beirut soon take sides in their own camps, entrenched in centuries of animosity. It isn't long before Tony is accused of Zionism, and tempers begin to flare, threating to engulf the city in violence over the pride of two men who refuse to see the other's point of view.

Like Paul Haggis' much maligned Oscar champion, Crash, The Insult attempts to put a Band-Aid on a deep wound, arriving at the most trite possible solutions for an issue steeped in history and violence. Doueiri is asking "Why can't we all just get along?" Which is a valid question, but The Insult's "kumbaya" mentality is just so painfully reductive that it almost seems like an insult to both sides in and of itself. Doueiri posits that both sides are, in fact, victims, and that they must meet in the middle to find common ground. In one of the film's most ridiculous moments, Tony begins to find that common ground when Yasser reveals that he prefers German made goods over Chinese goods, a position Tony had taken over auto parts earlier in the film. It's a scene that rivals Batman vs. Superman's now infamous "Martha moment" for its sheer absurdity.

It's hard to deny that its heart is in the right place. It begs for a deeper examination of the roots of the conflict, and for mutual understanding of the ways in which both sides have been victimized. Unfortunately, the film itself never manages the level of depth for which it advocates. Using these two men as symbols for their respective sides comes across as simplistic rather than layered, reducing the conflict to an inane spat giving neither side the dignity it deserves. This is especially true considering that Yasser is so clearly in the right in the context of the film, and yet both sides are made to look equally culpable in a mess that could have been easily avoided.

The Insult is slickly made, to be sure, but it lacks the depth to back up its ambition. It wants to boil down a thorny issue to its most essential parts, and in so doing does neither position justice. There's a great deal of drama and thematic meaning to be derived from this issue, but in its quest for easy answers, The Insult ends up insulting the intelligence of its audience rather than allowing us to draw conclusions on our own.