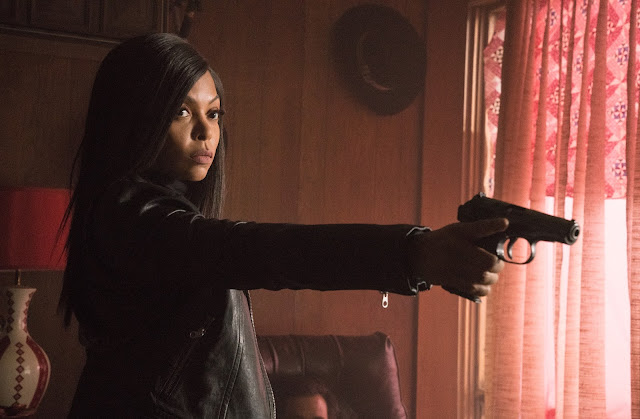 As we were leaving our screening of Proud Mary, my wife remarked to that "it seemed like the whole point of that movie was so Taraji P. Henson could shoot people to the tune of 'Proud Mary.' I liked it." And she's not wrong, everything about the film seems to be building to that moment, and when it comes, it's every bit as glorious as we've hoped it would be. The rest of the film certainly feels built out from there, but when the movie is this fun and well executed, its thinness of plot almost seems beside the point. And if Proud Mary is anything, it's certainly a lot of fun.

Henson stars as Mary, a hitwoman with a heart of gold, who takes an interest a young boy named Danny (Jahi Di'Allo Winston) after being assigned to take out his father. The boy ends up becoming a drug runner for a rival syndicate, and when one of his deals goes wrong, Mary rescues him and takes him in. Seeing that the boy has been abused, she lets her temper get the better of her, taking out a rival drug lord and triggering an all-out war between two of Boston's most powerful crime operations, one of which is lead by the surrogate father (Danny Glover) who once adopted her off the streets just like she adopted Danny. Danny's presence further complicates matters, leading Mary to once again take matters into her own hands so she can at last retire in peace. 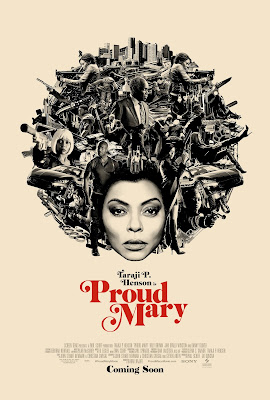 Proud Mary has its roots in the "blaxploitation" films of the 1970s like Foxy Brown and Shaft. Director Babak Najafi (London Has Fallen) shoots with a no-frills, no-nonsense style, utilizing tremendous narrative economy to quickly establish time and location in order to move the plot along. At only 88 minutes, Proud Mary moves along at a breakneck clip, and it does so without belaboring the story with unnecessary exposition. Who is Mary? How did she end up killing people for a powerful drug lord? We get hints along the way, but ultimately it doesn't matter. All that matters is the story at hand, and Najafi isn't afraid to get his hands dirty to tell it.

Like its blaxploitation brethren, Proud Mary takes us into the grit and grime of the inner cities, out of which a powerful African American hero arises to exact justice on those who would keep them down (Quentin Tarantino paid similar homage to the genre in Jackie Brown). As such, the film also feels thoroughly modern, with Taraji P. Henson putting her own spin on the lone-wolf hero whose latest incarnations have been John Wick and Atomic Blonde. And boy does Henson nail it. Here is a proud black woman, kicking ass and taking names in Trump's America, and it is a thrilling thing to behold. Henson is a bonafide star, and Proud Mary is the vehicle she deserves.

Its Achilles heel is its weak script, which often gets bogged down in cliches, but Henson is just so good, and Najafi's direction so solid, that the film resonates in spite of its occasionally wooden dialogue. Together they deliver a truly thrilling action film that moves like lightning and never lets up. Najafi doesn't cut corners, instead he trims the fat, keeping the ball rolling without any unnecessary detours. And through it all, there is Henson; magnetic, assured, vulnerable, and truly, utterly in command of every moment. Henson's Mary is a hero I would follow anywhere. This is good, old-fashioned, no-bullshit action filmmaking, and Henson is its steely yet maternal heart. I loved every minute.