DVD Review | "The Woman with the Five Elephants" 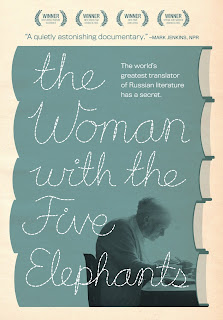 NOTE: This is a repost of my original review, posted on July 15, 2011, with a postscript regarding the DVD release.

The titular five elephants of Vadim Jendreyko's elegant and lovely new documentary, The Woman with the Five Elephants, refers to the five works of Fyodor Dostoyevsky translated by renowned translator, Svetlana Geier.

Born in Ukraine in 1923, Geier grew up under the reign of Josef Stalin,who had her father arrested as a political prisoner. Her father, however, became one of the lucky few who were actually released from such imprisonment, but he died a little over a year after his release from injuries caused by the torture he endured behind bars.

However, when the Nazis invaded in 1941, Geier found herself living under a different sort of regime, one that scorned her non-Aryan roots, but one that also respected her intelligence, and she found work as a translator for various German military commanders, whom she defends to this day as being separate from the heinous crimes of Adolf Hitler. One even put his military career on the line to see that she got out safely and received a good education, resulting in his being shipped off to the Eastern front.

Geier has led an eventful life, and grown into one of the most respected translators in the world, dedicating her life to translating Russian literature into German. Language and literature, once an escape, became a way of life. Her deep and abiding love of words gives way to a rich and keen appreciation of the nuances of language, and the film evokes her passion with great skill. Her wisdom and life experience seems to radiate out of every frame. In fact, The Woman with the Five Elephants is perhaps one of the most incredible films about the art of creation I have ever seen. Watching Geier in the heat of translation is disarmingly riveting - her friends that assist her with typing and proofreading almost becoming sparring partners in an intellectual game.

But it is certainly no game. Geier takes her work seriously, and she knows what she wants. To her, a translation is about seeing the big picture of the work, to capture the subtleties and cadence of the text, to be as true to the spirit of the author's intent as possible, while making the work her own. She is an artist unto herself, a brilliant craftsman whose work is every bit as original and powerful as the authors she translates. It is almost as if she distills a work down to its root and rebuilds it anew as a singular, even more impressive work of art.

Geier is clearly a remarkable woman. And while she may not have changed the world, Jendreyko was right to recognize her exceptional qualities. She is a woman who deserves her own film. Geier commands attention, and we hang on her every word like rapt pupils. Her eloquence extends not just to her writing, but her every day speech as well. Each sentence is like a poem, and it is clear she chooses her words carefully, crafting each sentence with great care and artistry, as if she is translating the novel of her own life.

Jendreyko wisely steps back and allows Geier to tell her own story with her own words, only occasionally stepping in to fill in necessary historical details. This is her story, and she tells it well, offering a very special insight into the ways of the world. For his part, Jendreyko turns academic pursuits into something truly electrifying, crafting a documentary on translating 19th century novels that is wholly compelling, and even thrilling. The creation of any great art is always an act of elation, but here it almost attains something divine. As Geier says, the goal of existence should not be mere existence, but to transcend one's existence. She transcends not only existence, but art itself, and The Woman with the Five Elephants transcends the documentary form and attains its own sort of artfulness - a quiet and lyrical study of a truly remarkable human being.

DVD addendum: For the inaugural releases of their new documentary label, Spark, the Cinema Guild turned to one of their own, The Woman with the Five Elephants, and Everyday Sunshine: The Story of Fishbone, which they did not distribute theatrically. While the focus clearly went into Everyday Sunshine, which is heavier on the extras, the strongest of the two films is clearly The Woman with the Five Elephants, which went severely overlooked upon its theatrical release, despite being one of 2011's finest documentaries.

The extras are a bit sparse, and are made up of about 25 minutes of deleted scenes, which provide more of Geier at work. As some of the most fascinating aspects of the film, spending more time with Geier a welcome addition. The most notable extra, however, is the Sergei Loznitsa's short film, Portrait. While it is not directly connected to The Woman with the Five Elephants, it's an interesting artifact. Made up almost entirely of filmed tableaux, with subjects posed as if for a portrait, Portrait is a series of images frozen in time. It is not unlike Chris Marker's La Jetee, a film entirely composed of photographs. But Portrait does not tell a story, at least not a story in the traditional sense. Instead, it plays out like the photographic history of a people. While it feels more like an art installation than a film, Portrait is a lovely and evocative look at the Russian peasantry. The careworn faces of these farmers and laborers seem to speak from across the ages, their stillness inviting open interpretation of their individual stories. It's amazing how haunting such a simple film can be, but it works.

While the overall package may not be quite on par with some of the Cinema Guild's other releases (although the artwork is beautiful), it's great to have this lovely little gem on DVD. Any chance to collect more wisdom from the formidable Geier is something to be celebrated.


THE WOMAN WITH THE FIVE ELEPHANTS | Directed by Vadim Jendreyko | Featuring Svetlana Geier | Not rated | In German and Russian w/English subtitles | Now available on DVD from The Cinema Guild.
Email Post