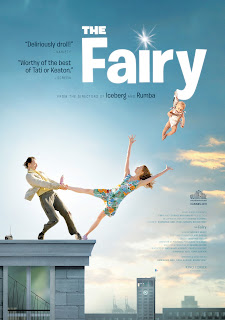 As a fan of Bruno Romy, Dominique Abel, and Fiona Gordon's Rumba, I was thrilled to learn that Kino Lorber would be releasing their latest film, The Fairy.

There's just something special about these three talents that cannot be ignored. Their films are the epitome of collaborative filmmaking, with the two leads, Abel and Gordon, sharing directing credit with Romy (who also cameos in the film), yet never feel like there are too many cooks in the kitchen with differing, incongruous styles. Their brand of droll, physical comedy recalls Buster Keaton and especially Jacques Tati, who shared their decidedly French sensibilities. Like Rumba before it, The Fairy often borders on the absurd, with characters taking breaks in the action for seemingly random dance scenes and other moments of surrealism (a man flies from building to building, a dog in a suitcase walks around as if the suitcase is possessed). But in its strangeness lies its charm. It doesn't have to make sense that a dog in a suitcase can walk if its legs aren't sticking through, and those looking for logic are best suited to look elsewhere, because The Fairy is all charm and heart and little else.

It may seem unbearably twee to more cynical personalities, because The Fairy is the kind of film that is almost incessantly cheerful from start to finish. Rumba was a somewhat darker comedy that nevertheless kept an upbeat tone throughout all the misfortunes that befell its characters. This time around, Abel and Gordon star as characters with their own names as two awkward people who meet and fall in love in a very unusual way. Abel, who is referred to as Dom in the film, is a hotel clerk who cares very little about his job, and even less for his overbearing boss. One evening, a young woman named Fiona (Gordon) walks into the lobby and announces that she is a fairy and offers him three wishes.

Incredulous, Dom asks for a scooter and free gas for life. When he awakes the next morning to discover that his wishes have come true, he realizes there is more to Fiona than meets the eye. The two quickly become inseparable, but when Fiona is captured and put in a mental hospital, Dom sets out to rescue her. The ensuing madness involves mental patients, the police, illegal immigrants, and one adventurous newborn baby, all thrown into one wildly entertaining French souffle of a movie.

While overall I think Rumba was a stronger film, with its almost complete lack of dialogue and stronger emotional center, The Fairy is nevertheless a wonderfully droll comedy, showcasing the filmmakers' strong visual sensibilities. From the spot-on comedic framing to the precise physical comedy, Abel, Gordon, and Romy are perhaps the heirs apparent to Jacques Tati's legacy (along with animator Sylvain Chomet, whose film, The Illusionist is probably the best Tati film Tati never made). And yes, it is a fairy tale in its own strange way. Fiona may or may not be an actual fairy, and Dom is hardly a handsome prince, but these two kindred spirits form a kind of inexplicably perfect union who find absolute bliss even while running from the police for stealing gas (among other accidental catastrophes).

Abel and Gordon have great on-screen chemistry (probably due to their own off-screen relationship), and it is clear that their strong creative energy translates behind the camera as well. Their films create singularly peculiar worlds with their own strange sense of reality that are endlessly beguiling without coming across as trying too hard to be cute. It's a difficult balance to walk, but The Fairy hits all the right notes. It's a little bitty movie with a great big heart that is nearly impossible to resist, and Abel and Gordon are quickly establishing themselves as some of world cinema's most nimble comedians.