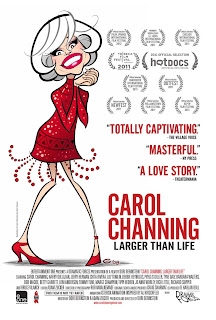 There are few figures in the world of film, television, or theatre more inherently likable than Carol Channing.

Perhaps best known for originating the role of the plucky Dolly Levi from Hello, Dolly!, Channing, now nearly 90, still commands the screen with the same effortless charm as she did when she first took Broadway by storm decades ago.

Dori Berinstein's new documentary, Carol Channing: Larger Than Life, is both a celebration of her talent and a tribute to her enormous spirit. It's also a deeply touching love story between Carol and her beloved husband, Harry Kullijian, who sadly passed away in December, preventing Channing from doing any publicity for this film

It's a romance straight out of the movies, fitting for the irrepressible Channing who often seems more like a character from a Broadway play than an actual person. 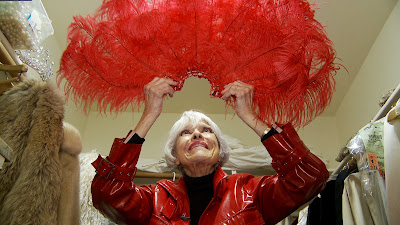 But real she is, and gloriously so. There are few people that could make an hour and a half in their company so thoroughly enchanting that it flies by as if no time has passed at all. Berinstein takes us through her career, from her humble beginnings as a child on her school's stage for the first time, to her most recent appearance at a benefit concert featuring Angela Lansbury and Chita Rivera long after her retirement from the stage. It's as heartwarming as it is thrilling to see Channing still performing. She's a born entertainer, and even at 90 years old her energy hasn't faded.

Berinstein wisely steps back and allows Carol to be Carol. There's no pretense about her, no arrogance or cynicism. The woman truly loves what she does, and her enthusiasm is simply irresistible. And it's clear from the cavalcade of stars who have come out to pay tribute to her in this film that she is truly beloved by all who know her. From Phyllis Diller to Barbara Walters, from Lily Tomlin to Tyne Daly, entertainers of all stripes sit down to honor a true living legend. But the real thrill here is Channing herself, whose iconic voice can't help but put a smile on your face as she shares her tales of life in the theatre, and offers her insights into the Broadway of today. 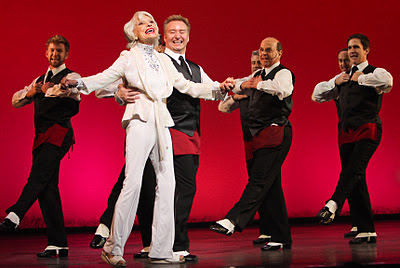 It's more than just an effusive series of breathless praises for Channing, however. The heart and soul of the film is Channing's relationship with her husband, Harry. Once close childhood friends, Carol and Harry were separated for decades. As Channing rose to fame, she was caught in an unhealthy, poisonous marriage to a controlling, overbearing man on whom Carol's purity of spirit was lost. It wasn't until she published her book, "Just Lucky I Guess," in 2002, that Harry saw his name mentioned and decided to call her up. The two were reunited and married within weeks, and they stayed madly in love until his death in December 2011. It's a love story straight out of a fairy tale, somehow befitting Channing's almost otherworldly vivacity.

It may be mostly thanks to the woman herself, but Carol Channing: Larger Than Life is something truly remarkable. It's an endlessly enthralling and enchanting experience, a ravishing, toe tapping tribute to a life well lived. Films like this so often feel perfunctory and self congratulatory, but every moment is pitch perfect, unassuming, and jubilantly rendered. It's a film, and a life, worth cheering for, that will send audiences out of the theater on a cloud, whistling her iconic tunes, grinning from ear to ear. Welcome back, Carol. It's so nice to have you back where you belong.