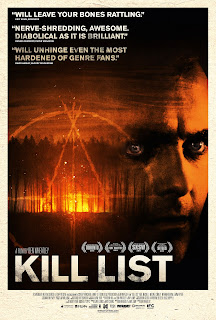 Good horror films are hard to find. It is perhaps the most critically unappreciated genre while simultaneously being one of the most widely popular. The problem for critics is tha horror films are so rarely great art anymore, and often rely on cheap jump scares and gore. But the bottom line is that while critics may not care for them, audiences love a good scare.

There are a lot of elements at work in Kill List - it's part road movie, part mumblecore, and part horror; the film plays out a bit like Michael Winterbottom's The Trip coupled with A Serbian Film.

A strange mix, to be sure, but Kill List is a strange film. Not particularly original, necessarily, but with a strong vision and sense of assuredness in its own madness.

It seems a bit aimless at first - a slow burning, mostly improvised introduction to two hit men, Jay (Neil Maskell) and Gal (Michael Smiley), and their families that doesn't really seem to go anywhere for a while. They fight, they eat dinner, they discuss guns, but the movie seems stuck in first gear. By the time they finally set out on their mission (which they don't even know the nature of), the film finally picks up steam as it becomes clear something isn't quite right with Jay. Killing does something to him, inspires a strange bloodlust in him, and he flies into ever increasing fits of berserker rage with each new kill.

At first the victims seem like typical, even understandable, targets. Child molesters, drug dealers, people that won't be missed, and it almost makes them feel like they're doing some sort of public service. Their final target, however, is a different animal altogether. And they soon begin to realize that they have gotten themselves in way over their heads. Jay's descent into madness has lead them into a startling trap, where even their carefully honed skills may not be able to save them.

The final stretch of Kill List is by far its strongest asset, but its also its most problematic. Jay's transformation is certainly harrowing, and it sets the tone for the final third of the film. But the film's final act almost seems like a different film. The sudden appearance of a mysterious cult (whose origins are never revealed) seems so out of left field that it's a bit jarring. That doesn't take away from the fact that the film's final act is genuinely frightening. Wheatley creates an atmosphere of palpable dread, and delivers a brutal payoff for those with the patience to wade through the occasionally plodding first half. The scene in the tunnels underground is shockingly intense, and is almost all the more effective for its drastic tonal shift. The film becomes a horror movie almost in an instant, and Wheatley delivers the promised scares with an almost sadistic glee.

The ending, while somewhat controversial, is chillingly ambiguous. It isn't quite earned, perhaps, as the film tends to rely on the audience's acceptance of sudden plot twists without much question. But Wheatley manages to overcome some of these narrative gaps through sheer force. Kill List shocks and awes, creating a highly effective atmosphere with some real scares, I'm just not convinced there's as much going on beneath the surface as it seems to think there is. Wheatley is clearly a clever craftsman, but by delving into Wicker Man territory for the film's terrifying denouement, he ends up sacrificing narrative depth for atmosphere. It works on a purely visceral level, but there are still a few kinks that need to be worked out. Kill List has balls, certainly, it just doesn't quite have the brains to back them up.