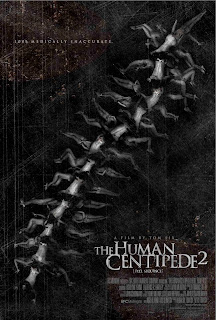 The original Human Centipede is one of those films whose notorious reputation is actually much worse than the film itself. While I was no big fan of Tom Six's highly original horror film, I thought it was effective enough, even if it never really expanded beyond its outrageous premise, which was its strongest selling point. The idea of attaching people together, mouth to anus, to form one long digestive tract and the anonymous centipede is admittedly ghastly, and Six maximized the horror by showing relatively little. He allowed the idea itself to get under your skin, and it was that idea that audiences found so disturbing rather than the actual content. I've encountered many people who either refuse to see it or talk about it in hushed tones, as if it were the epitome of cinematic depravity, like the mere mention of its name is unspeakably dirty.

I would like to say that Human Centipede 2 at least has a unique premise like its predecessor, but it doesn't, because anyone who has seen Book of Shadows: Blair Witch 2 will instantly recognize it.  The Human Centipede actually exists in the world of this new film as the object of obsession to a lonely security guard named Martin, who spends his nights pleasuring himself to its lurid images. At home, his overbearing mother criticizes his every move, and plans their own murder suicide when psychiatric help seems to do little to bring Martin out of his shell. He is haunted by the abusive voice of his imprisoned father, whose specter is still inflecting psychological harm on him even from his jail cell. Yes, Martin has one of those awful home lives directors often mistake for character development, and he escapes by watching The Human Centipede over and over again, keeping a scrapbook of all his favorite moments.

But just watching the film isn't enough for Martin. He wants to live the film. And not only live it, he wants to outdo it. So he sets about kidnapping victims in preparation to make his own human centipede. Unlike the villainous Dr. Heiter from the first film, however, Martin has no medical experience, so the resulting 12 person creature is even more grotesque than the original, as Martin slices, dices, and staples the people together  in one of the most horrific displays of sheer tastelessness the cinema has ever seen.

Clearly, Six's intention here was to pull out all the stops and deliver the film that The Human Centipede's notorious reputation led people to believe it was. Shot in grim black and white (except for the human excrement...that's still brown), The Human Centipede 2 replaces the original film's quiet menace with relentless graphic violence, and squanders any chance for legitimate social commentary by wallowing in its own filth. Six seems almost as obsessed with his own perversion as his protagonist, and he bathes nearly every moment of the film with increasingly disgusting horrors, which some critics have misguidedly compared to the eating of human excrement in Pier Paolo Pasolini's infamous 1975 masterpiece, Salò, or The 120 Days of Sodom. The difference is that Pasolini had a point. He was railing against Fascism and neocapitalism. Six is just laughing at us, taunting the audience for having dared to demand more. If he is satirizing human lust for cinematic blood, then his satire is displaced, having disappeared firmly up its own ass. He isn't satirizing, he's fetishizing, and that's more disturbing than any of the mindnumbing terrors in the  film.

There is clearly a statement to be made here. Joe Berlinger made it in the severely underrated (and studio neutered) Blair Witch 2, about the effect of media consumption in an increasingly media saturated world. There is also a statement to be made about fanboy culture's increasingly blurred line between fantasy and reality. But Six clearly has no interest in social commentary or making any kind of statement of any kind, other than to send audiences running out of the theater and straight to the bathroom (or the shower). He's a cheap sensationalist, a sideshow carny peddling naughty thrills without the decency to include the thrills. There is no message here, it's useless and repulsive without meaning, a psychotic circus of grotesque imagery. If Six intended a message here, it's buried under a pile stinking, rotting shit.