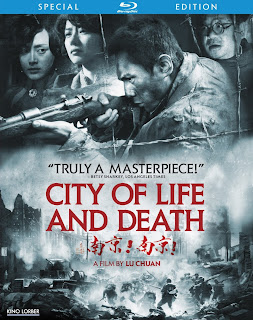 NOTE: The following is a re-post of my original review, which was published on May 9, 2011, with an added post-script about the blu-ray release.

The Rape of Nanking is a piece of World War II history that, despite its massive importance in the Pacific Theater and its infamy to the Chinese people, is relatively obscure to most Americans.

The details of the massacre have been long contested by the Chinese and Japanese, but the fact remains that on December 9, 1937, Japan attacked the Chinese capitol of Nanking and began an occupation that would eventually result in the deaths of over 300,000 civilians. To the Chinese, it is a great event of national mourning, akin to the bombing of Pearl Harbor, and it still lingers in their collective memory today. So much so that when director Lu Chuan began making City of Life and Death, he stepped on more than a few toes.

While the film is supported by the Chinese government and approved by the Chinese censors, Lu set out to challenge the conventional narrative of the Rape of Nanking (as it was dubbed by the Chinese) and search for the humanity on both sides of the battle. Not content to make a mere propaganda piece, Lu instead sets out to find the terrible truth underneath the rubble of history.

Lu is able to breathe a surprising amount of humanity into the Japanese aggressors, even while depicting the terrors they wrought upon the citizens of Nanking. The film follows a number of real life characters as they try to navigate life in occupied Nanking. There is a ruthless Japanese commander, a Nazi representative who sets up a safe zone for Chinese refugees and his assistant, a Chinese collaborator willing to do anything to ensure his family's safety, a young Japanese officer who begins to question to righteousness of his country's actions, a Japanese girl working as a "comfort woman" to relieve soldiers' sexual tensions, a little boy who survives a horrific massacre - the list goes on.

The result is a stunning mosaic of the Nanking massacre that leaves almost no stone unturned. Lu examines it from every point of view, no matter how heinous. And in doing so he finds humanity amidst unspeakable tragedy. In one of the film's most wrenching scenes, Mr. Rabe, the Nazi representative, tearfully explains to a group of Chinese women that 100 of them must be taken to be used by the Japanese military for sexual gratification. In return, the Imperial Army would supply the refugees with food and warmth to last the winter. Slowly the gravity of the situation settles upon them, and one by one women begin volunteering. Lu films the scene primarily by showing hands slowing rising in the air. It is perhaps the most powerful scene in the film, and completely indicative of the film's devastating second half. The battle scenes in the film's first half are appropriately harrowing, but the second hour is where its real emotional power lies.


City of Life and Death begins with explosions and ends with the laughter of a child, making a complete emotional journey that puts the audience through the grueling experience of one of history's most appalling wartime atrocities. Shot in striking black and white, the film almost feels like a living war document, with a haunting immediacy and authenticity that seems completely organic. It is reminiscent Steven Spielberg's Schindler's List, and not just for their obvious parallels in their use of black and white cinematography. Lu directs with a delicate, respectful grace, never pushing sentimentality or overemphasizing the story's natural emotion. Liu Tong delivers a beautifully restrained score that perfectly complements the action on screen but never draws undue attention to itself. Lu is also a smart enough director to know when music is unnecessary, and the film benefits from his intuitive direction.

The film is, at its heart, a sweeping war epic. But Lu keeps the focus intimate, following the personal pain and triumph that marked China's national tragedy - a wound that remains open to this day. Lu challenges long held beliefs about Nanking, looking on the massacre with fresh eyes while maintaining a sense of national pride. While the Japanese are at times portrayed as vicious monsters, this is no mere Chinese propaganda piece. It's not only an unforgettable portrait of the horrors of war, but an ultimately hopeful reminder of the small moments of goodness and humanity that can be found even in the darkest places. China may have never forgotten Nanking, but I guarantee anyone who sees City of Life and Death never will either.

About the blu-ray: Because of its controversial nature in its home country, City of Life and Death is an important release, and Kino has treated it as such, issuing a two disc special edition of this impressive film. While the second disc contains only one special feature, it's a doozy. The feature length documentary, Matters of Life and Death, takes an in-depth look at the making of the film from director Lu Chuan's meticulous process to the difficulties with the Chinese government. Fans of the film will find a lot to feast on here, and may even find themselves strangely moved by the dedication of the crew, fully aware of the gravity of the story they have set out to tell.

The high-def transfer is especially beautiful. Kino preserves some of the film's grain, lending it an atmospheric grittiness to compliment its black and white beauty. While not always pristine, it somehow works with the subject matter, almost making it more immediate. It's a gorgeous transfer of a gorgeous film that remains one of the year's finest achievements.