Nikki Fenke is reporting that Sony Pictures has pulled a last minute switcheroo on the release of Roland Emmerich's Shakespeare conspiracy thriller, Anonymous, which was set to open wide on October 28. 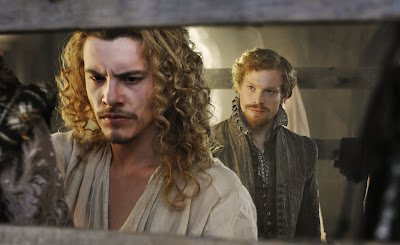 The film will now open on the 28th in select cities, followed by a platform roll-out through November. It's a strange move so late in the game, but it's not unheard of (20th Century Fox had similar last minute cold feet with Borat in 2006, before realizing they had a monster hit on their hands). I wonder if this shows a lack of faith in the commercial prospects of the film, or a lack of faith in the film itself? It was due to go up against Puss in Boots, the Justin Timberlake vehicle, In Time, and The Rum Diary starring Johnny Depp, so it doubtless would have been buried. While such an 11th hour release change may signal trouble, it actually may turn out to be a shrewd business move. Time will tell.
Email Post