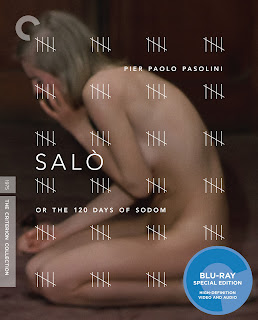 In one of the many special features on the Criterion Collection's new blu-ray release of Pier Paolo Pasolini's Salò, or The 120 Days of Sodom, Bernardo Bertolucci refers to the film as "atrocious and sublime."

I can think of no better description of Pasolini's infamous 1975 masterpiece, which has inspired as much breathless praise as it has vehement condemnation.

Perhaps most famous for its graphic depictions of sexuality and torture (which it combines to horrific effect), Salò comes across like an arthouse exploitation film, a grotesque circus of campy excesses whose frank portrayal of sexuality begs comparison to Nagisa Ôshima's In the Realm of the Senses, and disturbing imagery to rival Ruggero Deodato's Cannibal Holocaust. But despite what many censors would have you believe, Salò is no mere exercise in pornography, and is in fact something much, much more than its notorious reputation would lead us to believe.

In fact by focusing merely on the film's explicit content, the film's reputation almost cheapens what the film really is. Pasolini adapted the Marquis de Sade's novel, The 120 Days of Sodom, or the School of Libertinism and combined it with Dante's Inferno to tell a harrowing tale of four Fascist libertines who capture nine boys and nine girls to be kept as sex slaves in a secluded estate in the the town of Salò, a dummy Republic set up by Mussolini in 1943 as WWII was beginning to wane. The elite libertines put 18 youths through ghastly house of sexual horrors, degrading and defiling them through rape, torture, and other punishments (perhaps most infamously, making them eat human feces). It's a sadistic carnival of dehumanizing perversity, culminating in a wicked orgy of sexual torture that most viewers will find hard to shake.

But Pasolini clearly did not set out to titillate. As is pointed out in the short documentary "Fade to Black," Salò is almost anti-pornography. Nothing about it is erotic or arousing - it's repulsive and ugly. Pasolini was not only using such obscenity as an allegory for Fascist excess, he was also criticizing the post-war rise of neocapitalism he saw around him. Salò is not just a film about Italy in the 1940s, it is very much a film of its own time, and yet watching it today, it seems completely timeless. In Pasolini's vision, the elite are literally raping the nation's youth, destroying their future with their excesses and their economic policies. The constricting rules of the libertines reflect the senseless conformity of the Fascists, but the physical rape and forcible eating of shit represent something much more modern, and even eerily prescient. Salò today is as timely as it ever was, and when the twisted finale finally comes, Pasolini never allows us into the courtyard where the atrocities are taking place, instead making us observe through the binoculars of the libertines, voyeurs to a gruesome spectacle, thereby damning the audience for having sat by and watched it happen.

Even coming to the film 36 years after its original release, it almost feels as if Pasolini is speaking directly to us. While the opening title card dates the film at the end of WWII, it feels strikingly contemporary. It is a film both of its time and ahead of it. The sound of Allied planes roaring overhead remind us that the libertines are clinging onto the decadence of a civilization in decline, but it could really be any civilization at any time, which makes it especially haunting. Pasolini surrounds his horrors in beautiful settings, which not only serves as a stark contrast to the depravity we're witnessing, but also gives it that sublime quality Bertolucci was talking about. There's something strangely sumptuous about it (especially in Criterion's striking high-definition transfer), Theatre of Cruelty on a grand and breathtaking scale, like Lucino Visconti's The Leopard but with shit-eating and anal rape.  But it is grandiosity made harsh and cold. It reflects the libertines excesses and deconstructs them, making the audience complicit in their horrors by our passivity, not unlike the German citizens who sat idly by while Hitler slaughtered millions.

The extras on the blu-ray repeat those of Criterion's 2008 DVD release but are all uniformly excellent, offering interviews with directors such as Bertolucci and Catherine Breillat on the history and impact of the film, as well as compelling footage of Pasolini on set directing the sordid finale. The set also includes a booklet containing exhaustive essays examining the film through different lenses, from historical to cultural to theoretical. Like the very best Criterion releases, the supplements actually increase one's appreciation of the film, which is admittedly not for all tastes. Many will find its graphic content nearly impossible to watch, but for those with strong constitutions, Salò remains a harrowing and visceral masterpiece that marks one of the most impressive achievements in film in a decade that was full of them.