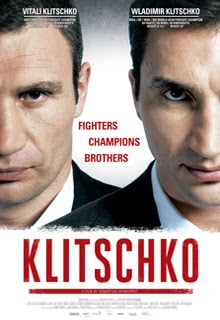 Boxing seems to be one of those subjects that the movies just can't get enough of. In the last several years we have seen Million Dollar Baby (which went on to win four Academy Awards including Best Picture), Cinderella Man, The Fighter (which received seven Oscar nominations), and Warrior (whose Oscar prospects have yet to be seen), while films such as Rocky and Raging Bull have achieved classic status.

I'm no sports fan, but I defy anyone not to feel a rush of adrenaline while watching Klitschko, an extraordinary story of two brothers from Ukraine whose rise to prominence in the boxing world is fraught with hardship and setback, as they eventually emerge victorious as dual world champions, brothers on top of the world. 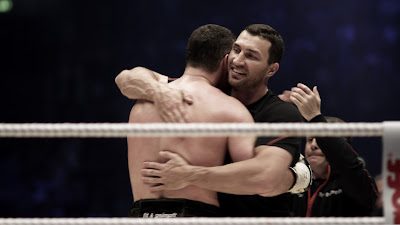 Utilizing some of the most dynamic cinematography I have ever seen in a documentary, Klitschko paints an intimate portrait of Vitali and Wladimir Klitschko, two brothers who share such a striking resemblance that they are often mistaken for twins. While their careers took different paths, they were always there for each other, even after a debilitating injury put Vitali permanently in Wladimir's corner. Through interviews with their family and crew, Dehnhardt pieces together the picture of who these men really are - brilliant (both hold PhDs), loyal (both have vowed never to fight each other), and completely dedicated (Vitali has gone on to found his own political party to fight corruption in Ukraine), these incredible men are champions both in and out of the ring.

While the film has a pretty typical structure, Dehnhardt tells the story so well that it's easy to forget you're watching a documentary. Klitschko has a distinctly narrative sensibility that puts it squarely in the realm of the great boxing films. He thrusts us into the ring with the athletes, building tension into a grand release. It is a film both epic and intimate, a rousing tribute to two incredible athletes who, upon closer inspection, are actually so much more.