Soundtrack Review | "The Skin I Live In"

2011 has been a year of great change here at From the Front Row. There have been lots of new developments, a new design, and a new focus on current DVD and blu-ray releases, especially of classic films. So I've decided to try something else a little different around here. I've always been an avid fan of film scores, and have amassed several hundred in my collection over the years, and have decided to review the occasional soundtrack here at From the Front Row from here on out. 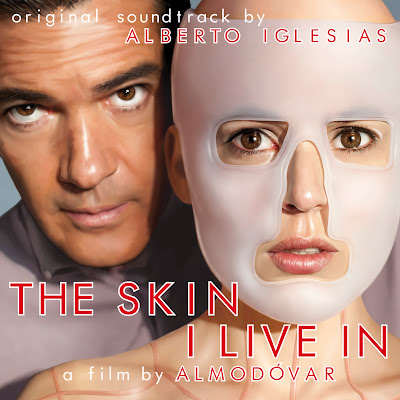 For the first in this new series of reviews, I have chosen Alberto Iglesias' score to Pedro Almodovar's The Skin I Live In. A longtime collaborator of Almodovar's, Iglesias has also provided excellent scores to the director's other films, including Talk to Her and Volver, and was nominated for an Academy Award in 2007 for his work on The Kite Runner (which, while lovely, wasn't the score I would have chosen for him to finally get Oscar recognition).

Iglesias stars things off simple, with a mournful violin solo in "Los Vestidos Desgarrados" (in the process evoking James Newton Howard's work for The Village), slowly building in intensity, setting the tone for what is essentially Almodovar's first horror film. The violin motif returns in "La Convivencia," "Una Patada en los Huevos," and "Tributo a Cormac McCarthy" in different variations and tones.

The piano also figures prominently in the score, especially in tracks like "Tema de Vera" (where he combines it with a haunting cello melody) and "Prometeo Encadenado" (where it is ominously combined with some low register strings and a reprise of the more frantic passages of the main violin motif). Since this is a horror score, Iglesias plugs in some more dissonant elements, either through more traditional minor piano cues or in more modern pieces like the electronica "Shades of Marble," which almost sounds like something out of a Tarantino film, as well as the frantic tension of cues like the climactic "Rojo y Negro," which sounds like a more traditional horror cue than we're used to hearing from an Almodovar film.

There are flashes of familiarity in cues like "El Cigarral," which features the driving strings and tinkling piano we have come to expect in Almodovar/Iglesias collaborations. He even incorporates some jazz in "Pequeña Flor," whose lonely saxophone evokes a film noir-like atmosphere, which is certainly no mistake, and there are also several songs included thank thankfully don't distract from the score, and fit right in with its mood.

The constant variations in style may not make for a consistent a listen as some of their previous collaborations, most notably Volver, but it's hard to deny the skill and craft at work here. Almodovar has a keen understanding of how to use music in his films, and Iglesias is a perfect collaborator, infusing the score with a specific identity even as it changes modes and styles. It's a gorgeous and classically minded work, and while the violin cues are a standout, the score as a whole deserves recognition for not only its intelligent construction, but for its haunting beauty. Fans of Iglesias and Almodovar both will doubtless be pleased with yet another fine entry in one of cinema's best director/composer relationships.

The Skin I Live In (Original Motion Picture Soundtrack) will be available for digital download on October 18, and in stores on November 29 from Lakeshore Records.
Email Post