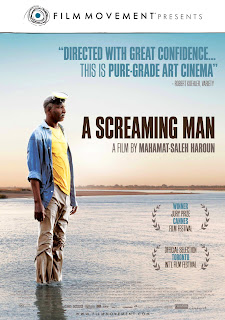 While the current political situation in Africa may be dominating the 24 hour news cycle, it is also having a huge impact on African filmmaking. And while the tragedies born out of the continent's social unrest are devastating, the effects they have had on its films have been incredible.
Tragedy and heartache can have tremendous impact on the artistic expression of a nation or region, and while it may sound crass to extoll the virtures of art created out of such pain, its hard to deny the power of such filmmaking and their importance in telling the stories of the downtrodden.
Mahamat-Saleh Haroun's A Screaming Man is very much a product of the social turmoil in Chad, and Haroun conveys the plight of the common citizen caught in an overwhelming political and societal upheaval, as rebel forces seek to overthrow an oppressive regime, the result of which may not necessarily be an improvement. 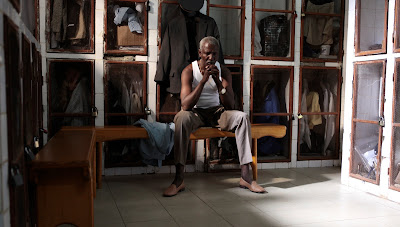 Adam (Youssouf Djaoro) is an aging former swimming champion who has settled into his twilight years as a pool attendent at an upscale hotel. The pool is his life, and he is thrilled to be able to share his life's passion with his son, Abdel (Diouc Koma). But economic and political changes in Chad, brought on by a growing threat of civil war, have forced the hotel owners to make drastic changes, and they do so by downsizing their staff, forcing out old timers to make room for newer, cheaper labor. Suddenly, Adam finds his life ripped away from him as he finds himself moved away from his beloved pool and replaced by his own son.
Now a mere doorman, the passion Adam has devoted his entire life to seems lost, and he becomes resentful of Abdel, who has inherited his father's job. But when the rebels come calling, Adam is forced to make a difficult choice, and the choice he makes will change the lives of his family forever. In a world turned upside down, families will be ripped apart, father will turn against son, and choices will be made that go against every instinct they have ever had. In the name of self preservation, lives will be destroyed. 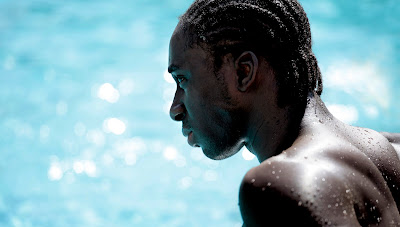 At its heart, A Screaming Man is about a man facing his own irrelevance, put out to pasture before his time, watching a younger generation, symbolised by a volatile and uncertain rebellion, rise up and change what was once a familiar world. But more than that, it demonstrates the horrors of war in a shockingly intimate way. While it focuses squarely on the home front, it explores the terrible things people do during wartime to save themselves. Haroun infuses the film with the powerful weight of the cry of an anguished people. It's a quietly devastating and elegant film, haunted by the tragedies of the people it depicts.
Despite it's title, there is a melancholy stoicism at work here. There are no over the top histrionics to be found, just an achingly devastating work of grim introspection. It's a story of sprawling scope on a deeply personal scale, using the family at its core as a microcosm for greater societal tragedy. The story of this family could be anyone, and Haroun is a naturally engaging director, conveying his themes with graceful restraint. The power of A Screaming Man comes from its delicate handling of a dark and volatile situation. Its screaming comes not from without from within, a quiet cry of anguish that radiates from every frame, the sound of a screaming man whose pain speaks for a nation.