Review | "In a Better World" 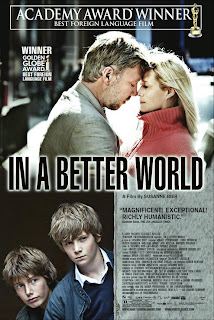 There is a longstanding cliche amongst cinephiles and Oscar watchers that the Best Foreign Language Film winner is usually the most sentimental, the easiest to digest, and lets face it, the worst nominee of the bunch. The Counterfeiters over Beaufort, The Secret in Their Eyes over The White Ribbon, Departures over, well, any of the other nominees that year. Even though I actually liked Departures, I don't think anyone would claim it was the best foreign film of its year. The Academy just doesn't really have the knack for picking them.

So when once again the Academy snubbed far more deserving films such as Uncle Boonmee Who Can Recall His Past Lives and Of Gods and Men, I immediately assumed this year's crop of films just wasn't going to measure up once again (despite the surprising inclusion of the excellent Dogtooth).

The eventual winner, Denmark's In a Better World, is at once exactly the kind of film the Academy loves to honor, and yet better than the typical foreign language winner, making it one of the strongest recipients of the award of the past decade.

Mikael Persbrandt as Anton. Photo by Morten Søborg, Courtesy of Sony Pictures Classics.
Directed by Susanne Bier (After the Wedding, Things We Lost in the Fire), In a Better World is the story of Anton (Mikael Persbrandt), a Swedish doctor who travels back and forth between a refugee camp in a wartorn African nation to his home in Denmark, splitting his time between helping victims of a brutal warlord with his family at home. His life away from the refugee camp, while far from the hard conditions of Africa, is strained. He is going through a tough divorce with his wife of many years, and his son Elias (Markus Rygaard) has grown distant, becoming a target of schoolyard bullies.

But then a new boy arrives in town, Christian (William Jøhnk Nielsen). Having just suffered the death of his mother, Christian has moved from England with his father to live with his grandmother, and when Christian helps Elias stand up to the bully, the two become fast friends. Christian, however, is harboring deep seeded bitterness and rage, and is not content with merely standing up to bullies. He wants revenge. As Christian's lust for vengeance becomes greater and more dangerous, Elias becomes more and more worried, especially where his father is concerned, who became the target of a bully of his own. Now, Anton begins to see parallels in his two worlds, and is forced to make hard choices - does he take the easy path of vengeance preferred by Christian, or turn the other cheek? The answers may not be as easy as he once thought. 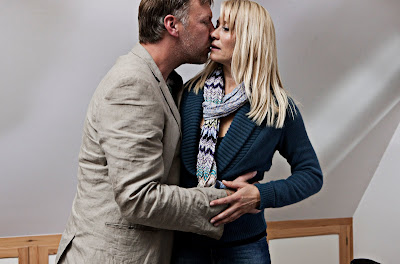 Left to Right: Mikael Persbrandt as Anton and Trine Dyrholm as Marianne
Photo by Per Arnesen, Courtesy of Sony Pictures Classics
Bier weaves an intricate and sensitive portrait of masculinity and the complexities of male bravado. At what point must you stand up and protect yourself, and what does it mean to stand up and be there better man? And more importantly, what are the dangers of unbridled machismo? Bier explores here themes with dignity and grace, even if they're often a bit too tidy and well defined. The film exists squarely in a world gone mad, but the surroundings almost seem too precise. It's undoubtedly a beautiful film, impeccably crafted and executed, but at times it's almost to a fault.

Nevertheless, Bier handles tricky emotional territory with great skill, creating a solid drama with the heart of a great thriller. Her young stars are astonishingly good, and bear the brunt of the film's considerable emotional weight as it builds to a shattering climax. While it may lose a bit of steam afterward, it skillfully juxtaposes outdated masculine ideas versus contemporary societal responsibilities in a consistently engaging way. Bier's bow may be a bit too neatly tied where it should be ragged around the edges, but this is really compelling, and ultimately thought provoking stuff.