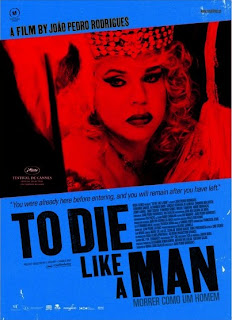 There is something sublimely magical in the way João Pedro Rodrigues' To Die Like a Man gleefully contradicts itself. It is often simultaneously subtle and melodramatic, playful and serious, presentation and yet wholly real.

One would almost have to have tongue planted firmly in cheek to make a film about drag queens, since the very idea of a drag queen is situated squarely in the world of camp. But Rodrigues finds surprising pathos in the world of Tonia, an aging queen who is nearing the end of her career and moving ahead with gender reassignment surgery, a move meant more for her boyfriend than for her. All her life she has created a character, a facade of a woman, and now she is taking the step to become that character forever.

Tonia's boyfriend, Rosário, is a junkie, a shiftless lout who is young enough to be her son and takes advantage of her generosity. It is an abusive relationship, but Tonia's love for him gives her the will to carry on taking care of him, even when his withdrawals make him violent and suicidal. 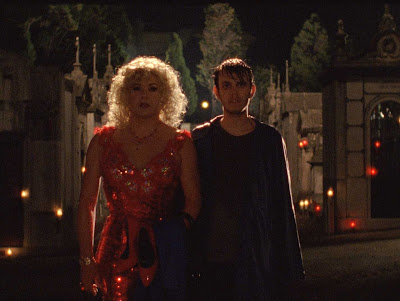 Just when Tonia thought she had enough trouble, her long lost son, Zé Maria, shows up at her doorstep, bitter and angry. He has gone AWOL from the army after killing another soldier, and has returned to seek refuge with the father he resents. Angry about his father's sex change, Zé Maria lashes out, concealing what are perhaps his own conflicted desires that have led him down a dark path of self loathing.

Stifled and at her wits end, Tonia wants to escape. So with Rosário and her beloved dog, Agustina, in tow, she heads off to visit Rosário's brother. But the two of them will never make it there. They become waylaid by an adventure into the woods that will bring them to new friends and mysterious experiences. And when it becomes clear that Tonia's body is rejecting her breast implants, she is forced to make some difficult decisions that could change the direction of her life forever. 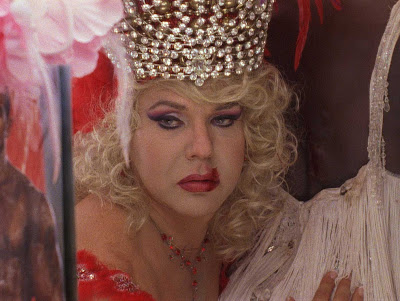 To Die Like a Man is, in some ways, the best Almodovar film Pedro Almodovar never made. There is a glossy, camp element present of course. We are dealing with drag queens after all, but it's also disarmingly sincere. Tonia exists in a world of artifice, of distance between persona and identity. For most of her life she has been a larger than life projection of someone else, and it isn't she is actually starts to become someone else that she discovers who she truly is. Make no mistake, this is not a film about judging transsexuals, or somehow suggesting that transexuality is to deny one's true self. Quite the opposite, actually. At its heart it's a celebration of humanity, a probing exploration of self-identity and image, of personal desires versus expectations.

Rodrigues uses long, fluid takes and vibrant color filters to create a slightly off-kilter world where almost anything is possible, each moment pregnant with possibility. It's a shimmering oddity of a film, a wholly unique and lively experience unlike anything we've really seen before. Rodrigues enthralls us and surprises us, creating something memorable and achingly beautiful, while striking a note that is so very, very true. To Die Like a Man, like its indomitable protagonist, refuses to be put in a box.