Win a Copy of "Marwencol" on Blu-ray! 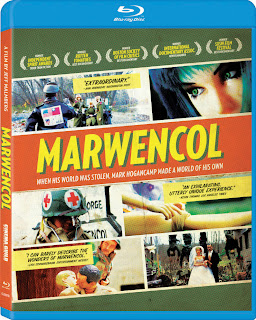 To celebrate the release of Jeff Malmberg's extraordinary documentary, Marwencol, on DVD and blu-ray on April 12, From the Front Row will be giving away a copy of the film on blu-ray to one lucky reader courtesy of The Cinema Guild!

Marwencol is a completely disarming and utterly unique look at an artist who represents one of the most unusual and remarkable artistic discoveries of the decade...a fascinating portrait of an artist who didn't even know he was one that challenges its audiences' notions of art and reality by confronting them with a man who refuses to be pigeonholed.

There are two ways to win.

1) Simply send an email with your name and address to contests.fromthefrontrow@gmail.com with the subject "Marwencol."

2) Head on over to my Twitter page and retweet the contest message.

Only one entry per person. Those who enter through both methods will have only one entry counted. The winner will be picked at random. You must be at least 18 to enter and a resident of the United States.

The contest closes on Monday, April 11, so get your entries in now!
Email Post