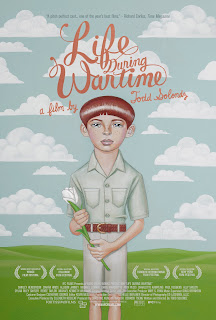 There is something instantly beguiling about the tinker toy oddity of Todd Solondz' Life During Wartime, a follow up to his acclaimed 1998 film, Happiness. But beneath its strangely perfect, somewhat quirky veneer, lies a much deeper and more meaningful study of wounded characters who are haunted by the ghosts of the past.

The film picks up with the same characters from Happiness, albeit with a completely different cast, in order to explore new facets of each character. Three sisters, Joy (Shirley Henderson), Trish (Allison Janney), and Helen (Ally Sheedy) are all dealing with issues of forgiveness and putting their pasts behind them. Joy discovers that her husband Allen (Michael Kenneth Williams) has not recovered from a very special problem that she thought he'd been cured of, so she runs away to spend time with her mother and sisters to try and put it all behind her and look to the future. 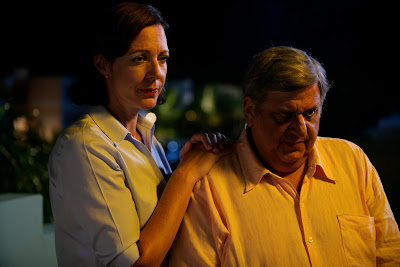 Allison Janney as Trish and Michael Lerner as Harvey in LIFE DURING WARTIME directed by Todd Solondz
Photo Credit: Francisco Román. An IFC Films release
Trish is embarking on a new relationship with Harvey (Michael Lerner), an older divorcee and single parent also trying to put his past behind him. Her youngest son, Timmy (Dylan Riley Snyder) is trying to make sense of a grown-up's world through his childlike sensibilities, and come to terms with his own discoveries about himself and his past. His father, Bill (Ciáran Hinds), is a pedophile, a former psychiatrist who has just been released from prison for abusing young boys and is attempting to rebuild his relationship with his oldest son, Billy (Chris Marquette). Meanwhile the third sister, Helen (Ally Sheedy), is dealing with her own feelings of inadequacy and the pressures of her success.

There is a lot going on in Life During Wartime. Characters interact and relationships overlap, friendships are made and broken, and the bonds of family are strained. It is a lot to keep up with, but Solondz juggles it all masterfully, keeping his touch light and the atmosphere effervescently odd. The tone often stands in direct opposition to the themes being displayed as the characters attempt to keep stiff upper lips through trying times, but Solondz uses this to his advantage, giving the film a satirical, humorous edge. 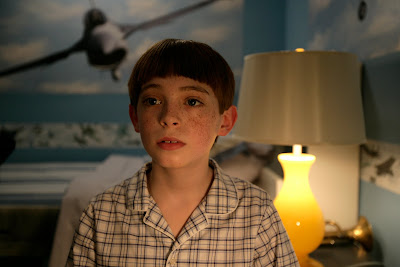 Dylan Riley Snyder as Timmy in LIFE DURING WARTIME directed by Todd Solondz
Photo Credit: Francisco Román. An IFC Films release
It is ultimately a film about forgiveness and moving on, symbolized most poignantly in Trish and Bill's young son, Timmy, whose wide-eyed innocence juxtaposed with the film's dark themes creates a haunting dichotomy. Timmy is growing up amid great turmoil and heartache, and while everyone around continually makes things more complicated, trapping themselves in difficult situations of their own devising, Timmy yearns only for simple things, and most of all, family.

Solondz deftly navigates the tricky waters of these characters' lives, as well as the delicate balance between comedy and tragedy, through his astutely written script. No one talks to each other like this, but the terrific ensemble cast makes it work. The very specific, peculiar nature of the dialogue sets the film squarely in its own world and its own sense of reality, but it always carries the essence of truth. Life During Wartime achieves a kind of delicate verisimilitude that is both sharply witty and beautifully melancholy. It's an unabashed joy of a film, a pleasure to watch and sink into. Solondz populates his strange little world with a host of wounded characters that are all fascinating in their own right, leaving a bittersweet and indelible impression.