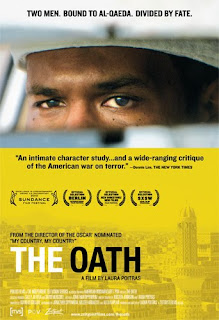 For many Americans, the wars in Afghanistan and Iraq are viewed through very specific filters, often in stark black and whites rather than the shades of gray that befit such a complex situation. It is divided into good versus evil, us versus them, with no room for dissent, question, or doubt. We are the good guys, we are the bad guys, end of story.

The problem with that mentality is, no one stops to ask why they hate us. Nothing is changed, and the vicious cycle continues. If the other side is blanketly viewed as pure evil, then there is no hope of resolution.

Enter Laura Poitras, whose new documentary, The Oath, takes a memorable and unprecedented look at the other side of the coin. It is the story of two men; Salim Hamdan, the former driver of Osama bin Laden who became the center of a landmark Supreme Court case after he was sent to Guantanamo Bay, and his brother in law, Abu Jandal, Bin Laden's former bodyguard. Their lives and stories are inexorably intertwined, making up a complex and layered portrait of the Jihadist movement in the Middle East. 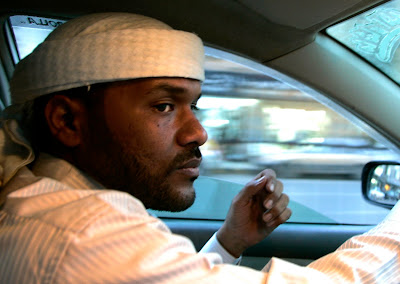 Abu Jandal in THE OATH, a film by Laura Poitras. A Zeitgeist Films release.

After being arrested by the Yemeni government in connection with the bombing of the USS Cole (a charge for which he was later acquitted), Jandal now spends his days as a cab driver, while guiding a new generation in the ways of jihad. Jandal is a complex and charismatic figure, personally shunning acts of violence and the killing of innocents himself while acknowledging their necessity for others. He is a guarded figure, and one wonders how much of that is due to the constantly rolling cameras. During one meeting with some potential young jihadists, he reminds them to be careful what they say while the cameras are on. While he denies that he is leading young men to jihad as part of the conditions of his release from prison, he is still very instrumental in their lives, not so much putting ideas in their head as he is bringing out and fostering ideas that are already there.

The film focuses mainly on Jandal. Hamdan is never seen or interviewed, but his presence is keenly felt as his lawyers prepare for the first Guantanamo military tribunal, and his family eagerly await his return after many years. It is a legal battle that will go all the way to the Supreme Court, ending in a short lived victory that only results in new laws designed specifically to prosecute him. 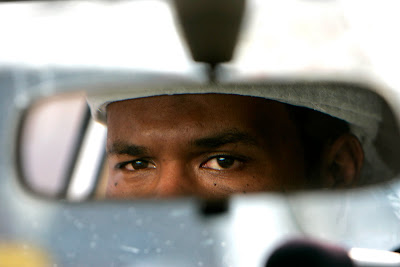 Abu Jandal in THE OATH, a film by Laura Poitras. A Zeitgeist Films release.
Jandal, on the other hand, serves as the audience's guide into an alien world. He obviously still has great respect for Bin Laden, even if he never returned to his service after his release from jail. By that time the war in Afghanistan had already begun, and the validity of Jandal's oath of loyalty is now in question. While one must take Jandal's statements with a grain of salt as they are often veiled and self-contradictory, he helps contextualize the war on terror in a way we have never seen before. His intimate insight into the inner workings of Al Qaeda is both chilling and facsinating, offering a rare glimpse into the mind of a jihadist.

It would be a mistake to look at The Oath as an endorsement of Jandal and his ideas. Instead, it is a window into another world, a chance to examine the other side of this war from a different perspective free from the usual filters and punditry. Poitras has crafted an extremely savvy and compelling documentary, an essential piece of the increasingly intricate puzzle that is the war on terror.