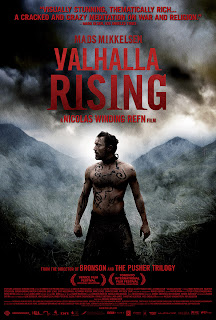 Of all the labels that could be used to describe Danish director Nicholas Winding Refn, the one that seems to suit him the most is, to borrow the term from Braveheart, "warrior poet." Like a brutal, unhinged Terrence Malick, Refn fills his film with meditative silences, while creating bloody beautiful imagery that both repels and entrances, wrapping the audience up in his haunting spell.

His latest film, Valhalla Rising, recalls the work of Werner Herzog, and most specifically Herzog's masterpiece, Aguirre: The Wrath of God. Like a modern day Heart of Darkness Refn leads us on a strange and mythical journey where violence and religion clash and its characters descend almost literally into hell.

It's a symbolic journey of course, but the descent into madness is a jarring visceral experience, and Refn, with the assistance of cinematographer Morten Søborg, create such breathtaking and chilling imagery that it's easy to become lost in its strikingly eerie style. 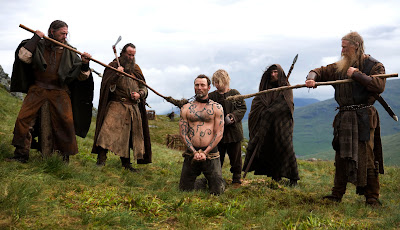 Mads Mikkelsen as One Eye in VALHALLA RISING directed by Nicolas Winding Refn
© 2009: Valhalla Rights ApS, One Eye Production, Blind Eye Productions, Scanbox
An IFC Films release
Our Virgil in this descent into the inferno is a mute Viking warrior known only as One Eye (Mads Mikkelsen), who lives in captivity under the rule of the brutal chieftan, Barde (Alexander Morton). His life resembles that of a gladiator, being used in bloody games for the entertainment of the other villagers and spending the rest of his time locked in a cage. But with the help of the boy who brings him food and water, One Eye escapes, and along with the boy (Maarten Stevenson) begins his journey back home.

But something is changing in One Eye's world. A new force is sweeping the land and assimilating or destroying everything in its path - Christianity. One Eye and the boy find themselves swept up in a group of crusaders on their way to the Holy Land, but providence has other plans. The crusaders find themselves blown far of course to an unknown land, a land of trees and mists, and strange inhabitants who carry weapons of wood and stone. Are they in Hell, as some of the crusaders believe, or have they discovered a new world entirely? 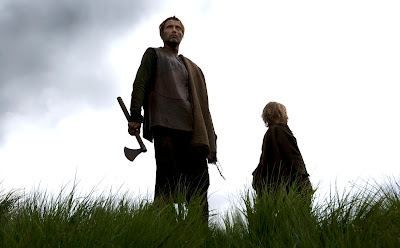 Mads Mikkelsen as One Eye and Maarten Stevensen as The Boy in VALHALLA RISING directed by Nicolas Winding Refn © 2009: Valhalla Rights ApS, One Eye Production, Blind Eye Productions, Scanbox An IFC Films release
One Eye remains an enigmatic figure throughout the film, speaking only through the boy who is his constant companion. The crusaders fear him, but their leader is determined to create a new Jerusalem in the land they discover at all costs. It's not hard to speculate as to the true identity of the crusaders' discovery, and Refn clearly has some very particular criticisms of the mixing of violence and religion, and especially the source of dogmatic Christianity in America. It's a chilling theme, and Refn's consistently disquieting style is always there to remind us that something isn't quite right. A spirit of dread and melancholy hangs over the film like a heavy fog, but I'm not convinced the film has quite as much to say as it thinks it does. It is often an exercise in pure style, and while that carries the film a long way, one can't help but feel that it could have gone deeper into the themes it explores.

Still, it's hard to deny that this is powerful storytelling. Refn has a stunning visual eye and creates a consistent mood. Refn's vision is wholly enthralling and hard to shake once it gets under the skin. Valhalla Rising is a thundering visceral experience, a rich and layered work of art that acts as a stylistic punch to the gut.