Review: "Around a Small Mountain" 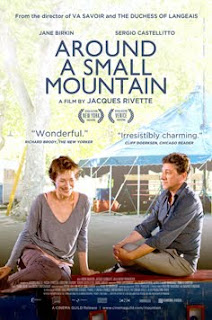 Jacques Rivette's Around a Small Mountain, like so many love stories, is a film about chance encounters. But it also isn't a typical love story. This is a film about a different kind of love, the kind of tentative romance that isn't necessarily destined to end in happily ever after, but the kind that comes along at just the right moment in time. It may not be permanent, but it helps at just the time it's needed.

The couple in question is Vittorio (Sergio Castellitto) and Kate (Jane Birkin). The two meet when Vittorio stops and helps Kate when her car breaks down on a winding mountain road. It's a small encounter, nothing unusual, except that Vittorio never says a word. He simply fixes her car then leaves.

But as fate would have it the two meet again when they reach their destination. Kate, it turns out, is a former circus performer reuniting with her traveling troupe, while Vittorio is just passing through. 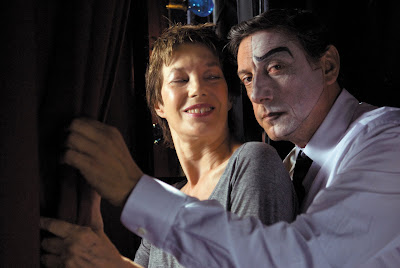 As a way of saying thank you, Kate invites Vittorio to come to the circus, and he gladly accepts. However the circus, as it turns out, is only a shadow of its former self. The crowds are small, and the performances have become unenthusiastic, despite the performers' undying devotion to their craft. Vittorio is the only one who seems to enjoy the performance, and the performers are all grateful. So fascinated is Vittorio by the world of the traveling circus, and so enamored with Kate, that he decides to stay for a while, making friends and exploring the grounds.

It is obvious that Kate is a wounded woman, and Vittorio is determined to find out why. The circus is largely made up of members of Kate's family, and bit by bit Vittorio pieces together the reasons for Kate's sudden and dramatic departure 15 years earlier. It is a pain that still haunts Kate, and while she finds his advances to be intrusive, Vittorio is determined to free her from her pain and give her a new lease on life. 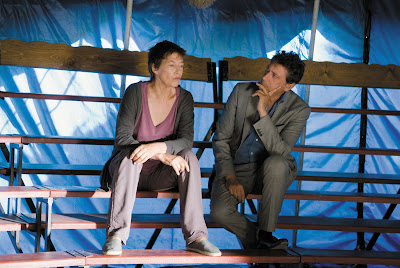 There is a kind of effortless charm to Rivette's scenarios, but the film is awkwardly staged. It often has the feeling of a filmed play, the characters stiffly blocked as if arranged for an unseen live audience. Rivette fills the film with dramatic monologues and other melodramatic trapping that seem to undermine the film's otherwise light touch. Rivette seems fascinated by the relationship between performer and spectator, but the film's rambling nature prohibits it from being clearly focused.

The characterizations are also oddly inconsistent, and the problems all solved a bit too easily. It's almost as if the film is too calculated, too precise. It lacks the messiness of real life, and the effect is ultimately alienating to the audience. The stiffness serves no real dramatic purpose, as it does in say, Todd Solondz' Life During Wartime, which thrives on precision and stiffness but does so to a very specific thematic goal. Here it just comes across as tedious, even if the characters' stories remain oddly compelling. Around a Small Mountain deserves points for its mature treatment of the relationship between its leads, never forcing romance beyond what is needed to help Kate. Only then are they allowed that glimmer of hope for a future together (as suggested in the film's breathtaking final shot), but the whole never seems to add up to more than the sum of its parts.