Trailer: "Casino Jack and the United States of Money"

The trailers just keep on rolling in today. Here we have the trailer for the new documentary by Oscar winner Alex Gibney (Taxi to the Dark Side, Enron: The Smartest Guys in the Room), Casino Jack and the United States of Money (Magnolia, 5.7), exclusively at Apple. 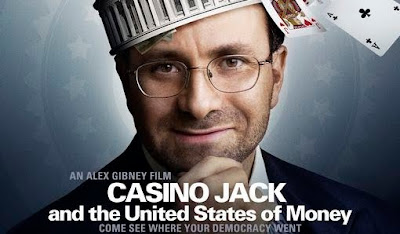 For his latest film, Gibney tackles infamous Washington lobbyist Jack Abramoff, from his meteoric rise in the Republican party, to his shaping of modern politics, to the scandal that eventually brought him down.

Casino Jack is an incendiary and timely film, not just as a look at one man gone wrong but a portrait of the hijacking of an entire political party by a bunch of overgrown frat boys out for personal gain, creating a poisonous atmosphere in Washington where our government is no longer out for us, but for themselves, directly leading to the current financial crisis.

The film opens May 7 from Magnolia Pictures. See it. And check out the new trailer.
Email Post