Review: "The Secret in Their Eyes" 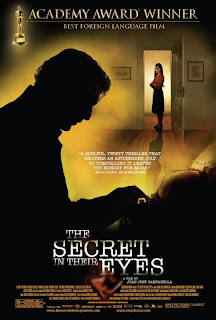 It's a strange phenomenon that seems to happen year after year, where the worst nominated film wins the Oscar for Best Foreign Language Film. This past year was no different. Although in the later days of the race, some pundits began calling it for Argentina's The Secret in Their Eyes, most still anticipated that the award would go to the far more acclaimed and more deserving A Prophet or The White Ribbon.

Alas, it was not to be, and Juan José Campanella's exceedingly mediocre The Secret in Their Eyes walked away with one of the nights few upsets.

The fact that it won the Academy Award had no bearing on the quality of the film, however, and comparing it to the other four nominees isn't fair nor is it valid film criticism. The bottom line is that The Secret in their Eyes is a weak film, that had no business being nominated for Best Foreign Language Film. But that is neither here nor there. It's just a weak film, period, Oscar nominee or not. 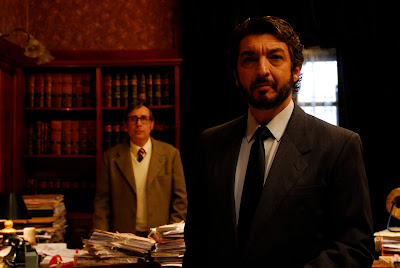 Left to Right: GUILLERMO FRANCELLA as Sandoval, RICARDO DARÍN as Benjamín Espósito. Photo taken by MARÍA ANTOLINI, Courtesy of Sony Pictures Classics
The film never really engaged me from the beginning. But there was one moment in particular that sealed the deal. Seemingly out of nowhere, a sweeping aerial shot swoops in over a city and into a stadium filled with people, right up to a specific person in the crowd, and continues for several minutes uninterrupted. It is a stylistic anomaly in an otherwise intimately shot film, completely unconnected and dramatically unjustified. The shot is jarring and distracting, and is ultimately indicative of a larger problem affecting the film - it's just completely uninvolving, and this random attempt to spice up the look with this pointless grandiose shot seems like too little, too late.

Granted, it is a sprawling story, unfolding over the course of 25 years, as a court investigator, Benjamin Espósito (Ricardo Darin) decides to write a book about an unsolved rape and murder that plagued him a quarter century before. He returns to his old firm for research, only to be reunited with a former colleague, Irene (Soledad Villamil), who is now a judge, and whom he had always had deep feelings for. Over the course of the film, Espósito relives the troublesome case, and reawakens old wounds and old flames in the process as he tries to come to terms with his past, and put a definitive ending to his book. 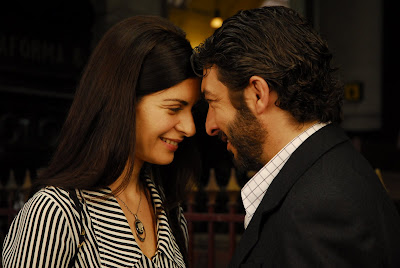 Left to Right: SOLEDAD VILLAMIL as Irene Menéndez Hastings, RICARDO DARÍN as Benjamín Espósito. Photo taken by MARÍA ANTOLINI, Courtesy of Sony Pictures Classics
As is often the case with films that span such a long period of time and rely so heavily on flashback, the narrative is often disjointed, and in this case, strangely lackluster. It's a curiously bland melodrama that never feels completely unified or particularly compelling, with all the makings of a soap opera without the over the top histrionics. As a whole, the tone is pretty downbeat. The Secret in Their Eyes is primarily a film of missed connections and unrequited longing, which can be interesting if done right, but here the mix of romance and murder just never quite jells. There is a lot of moping and quiet longing, but it never takes it to the next level, staying perpetually stuck in a conundrum of its own devising, before tying things up in a simplistic way.

No matter what, I always seemed to want more from it, but it plods where it should tread lightly, and drags when it should be nimble. It just never becomes a cohesive, satisfying whole. For all its drama, it feels painfully forced and trite, as dour and dull as it is unfocused. Even the talented leads can't save its rambling, mostly unmemorable plot. The Secret in Their Eyes is the kind of film that is nowhere near as deep as it thinks it is, and evaporates almost immediately after the credits roll. In the annals of Oscar history, it will be a footnote quickly forgotten.

Danny King said…
Somewhat surprised by your negative reaction because I actually just got done watching this week's "At the Movies" and both critics seemed very enthusiastic about this film as both a crime story and a romance.

I'm still anxious to see it myself, but I agree with you that the Foreign Language Oscar is almost always misplaced. It's why I wasn't surprised when Oscar pundits starting giving up faith in a victory for either White Ribbon or A Prophet.
1:36 AM

Matthew Lucas said…
Yeah it was by far my least favorite of the nominees, even if I thought THE MILK OF SORROW was bizarre beyond words, at least it was pretty. But this was just an interminable sit for me.
10:22 PM

myriam said…
Come on! Too much negativity! you put so much passion on your negative review that is suspicious. How much money did you lose? If you are really serious either you did not get it, in that case you need to see it again and start using your brain, or you are biased by something else such as rivalry or bigotry. Did you decide that the German movie should have won just because...is German? Sorry the movie is what is, no matter how much you want to discredit it.
6:07 PM

Matthew Lucas said…
I didn't like the film because I'm a bigot? Are you serious?

"The White Ribbon" should have won simply because it is a much better film.

The movie is what is you are correct. And I don't like what it is at all. Sorry if that offends you...but your negativity is, as you say, suspicious.
6:36 PM