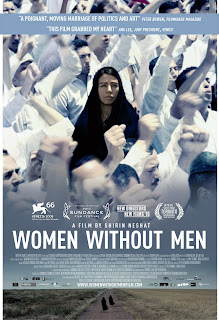 There is a certain tremulous beauty to Shirin Neshat's Women Without Men, a timely and well intentioned look at the lives of four Iranian women set against the backdrop of the 1953 CIA assisted coup.

The film is dedicated to all those who have given their lives for Iranian freedom, "from the Constitutional Revolution of 1906 to the Green Movement of 2009." With the Iranian election in 2009 attracting international attention and support, Women Without Men arrives at a time when the struggle for freedom in Iran is very much still in people's minds. Taking that to heart, Neshat, making her directorial debut, adapts Shahrnush Parsipur’s novel of the same name into a tribute not just to the those who have fallen trying to bring freedom to Iran, but to the women that society has overlooked.

It is a tale told with great empathy and sincerity, made all the more powerful not just from its uniquely Iranian perspective, but in that it is directed by an Iranian woman.

Told from the perspective of four different women, Women Without Men is a portrait of a country in upheaval, on a collision course with history that will eventually result in the Islamic revolution in 1979 and the institution of much more restrictive religious law. There is Fakhri, a middle aged woman caught in a loveless whose world is suddenly turned upside down by the arrival of an old flame, and whose husband is ready to throw her to the curb in favor of a new wife he finds more satisfying. Munis, a young, unmarried woman living under the thumb of her tyrannical brother, whose only way to be set free is through death. Her friend, Faezeh, knows only of her desire to marry Munis' brother, even after being brutally raped by two men from a coffee shop. And finally there is Zarin, a prostitute, sick of being used by faceless men to the point that she literally can no longer see their faces, and seeks to cleanse herself of her past.

Seeking an escape from the pressures of her marriage in Tehran, Fakhri purchases a lush orchard away from the city, that soon becomes a haven for for Faezeh and Zarin, far from the political turmoil that Munis finds herself in, at last an active participant in the world even in death. The orchard is an oasis, an escape for these women, who have each been abused by men in some way, and through each other find their only escape.

There is a certain timelessness to the film that is extremely appealing. The orchard seems like a place separate from time, where these women can escape their male oppressors and live apart from the civil unrest around them. But it is also a world that will soon come crashing to an end, and Neshat never lets us forget. Its magical realist aspects, although inherent to the work on which it is based, are often a bit disjointed and never really jell into a satisfying whole. Each character, even though united by the orchard, still seems strangely disconnected from the others. Since that relationship is really at the core of the film, it never feels as strong as it really should

However, it is hard to deny the voices of history that seem woven into the film's very fabric. It has a unique and singular perspective on a world few have seen clearly from the outside, with a remarkable sense of time, place, and atmosphere, even if it falls just short of compelling. The true accomplishment here is that Neshat gives voice to the voiceless, and Women Without Men is an impassioned cry for freedom that echoes across generations.