"No One Knows About Persian Cats"

Sometimes a film comes along and just blindsides you out of nowhere. That's how I felt after seeing Bahman Ghobadi's wholly remarkable film, No One Knows About Persian Cats (IFC, 4.16). 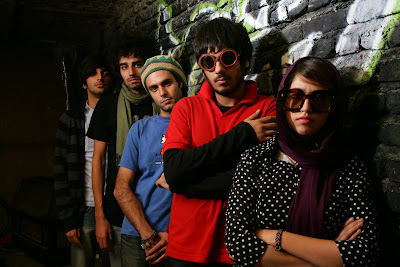 Pouya Hosseini, Arash Farazmand, Ashkan Koshanejad as Ashkan and Negar Shaghi as Negar in NO ONE KNOWS ABOUT PERSIAN CATS, directed by Bahman Ghobadi. Photo Credit: Mijfilm. An IFC Films release
A heartfelt love song to the world of underground music in Iran, No One Knows About Persian Cats follows two indie rock musicians from Tehran who have just been released from prison, trying to find a way out of the country to practice their music, while putting together a band of the most talented musicians they can find. It is a truly engrossing look at the Iranian underground music scene, oppressed by harsh Islamic laws on musical content and female singers, and the musicians who risk their lives for their art. Nearly a year after the wildly controversial elections in Iran, the film acts as a portrait of a new, younger generation of Iranians whose values stand in stark contrast to their hardline conservative leaders. This is a bracing and vibrant piece of filmmaking that demands to be seen, and despite its being condemned in Iran, this is the kind of thing that absolutely needs to find its way into the hands of young Iranians. It's an impassioned rallying cry against oppression and censorship through the power of music. And what music it is. The soundtrack, a mix of indie rock, heavy metal, and rap, covers many aspects of musical expression, it's a veritable cultural melting pot in and of itself.

No One Knows About Persian Cats will be released in the US on April 16. Until then, check out the trailer: