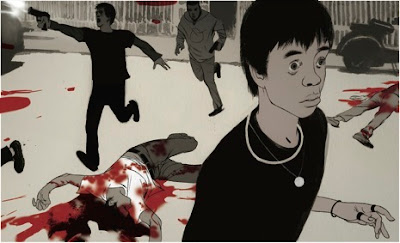 I've made it pretty clear that I'm not a huge fan of Matteo Garrone's Gomorrah, which opened in limited release this past Friday. I respected the film for what it was, but found it surprisingly underwhelming and a bit too scattershot for its own good.

But reading Anthony Lane's review in this week's New Yorker is almost enough to make me revisit my opinion. The biggest draw, and indeed the biggest success of the film, is its gritty realism. But get a load of this opening paragraph:

The first thing you should know about “Gomorrah” is that no fewer than three members of its cast have been arrested on suspicion of illegal activities. There could be no more unimpeachable testament, surely, to the integrity of Matteo Garrone’s film, which is about organized crime in Naples. Many of the actors were recruited from the area, presumably on the basis that they already knew the ropes, not to mention the Kalashnikovs.

That's not going to convince me that the film lacks focus...but damn. That really adds a whole new dimension of reality to it.

I still think it is a respectable piece of work, but my appreciation for it may have just risen a bit. And people say that film criticism is dead. THIS is what film criticism is all about. It makes us look at a film in a way we hadn't before. Even other critics can sometimes be made to revisit a position.

I'm not saying I think it's a masterpiece...I don't think I will ever think that. But the integrity and dedication of Garrone's work is undeniable.
Email Post

Anonymous said…
You know, I love this movie, but I really hate how some people are only seeing it now and are going on about how tedious it is. I fucking hate their conventional mentality, but whatever. But yeah, Garrone’s dedication and persistence to tell the story as factually correct as he could without diluting the drama is something worthy of our attention.
2:48 AM

Anonymous said…
Well Nick, we rarely disagree this drastically, but I found GOMORRAH highly derivative and redundant. I loved the Anthony Lane revelations there, but the film presented nothing that we've not seen before, especially in the vastly-superior CITY OF GOD.

But your reaction is fair enough, and the film has far more fans in the critical ranks than not. Down the road I'll look at it again, but the first viewing didn't do it for me.
10:55 AM