In Which Yours Truly Stirs Up Controversy 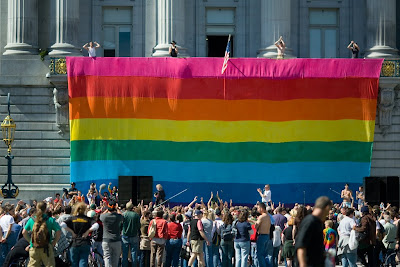 A commenter on the Dispatch forum boards had this to say about my review of Milk, which was published in last Thursday's edition:

After reading the movie review for Sean Penn's new film "Milk", by Matthew Lucas, I felt compelled to write. Lucas is obviously a very talented writer, but his blatant bitterness concerning those who exercise their constitutional right to voice opposition to the homosexual agenda overshadowed his descriptions and opinions of the actual film. Lucas spent his most descriptive and passionate comments on those who voted for Proposition 8 and Proposition 6. That's social commentary not a movie review. What's more, he needs to get his facts straight about who supported Proposition 6 and 8. A litte research would have revealed that fundamentalist Christians were only a small portion of those who voiced opposition...even if they were "rabid" and "right-wing". I'd prefer a little more discussion about interesting points of the movie, such as supporting actors, character development, cinematography, etc.

Anonymous said…
This man's argument is ludicrous. Your review was great, and within that context, you examinined the pertinent sociological issues that defined the backdrop and essence of this film.

At least he admitted it was superbly-written.
11:37 AM