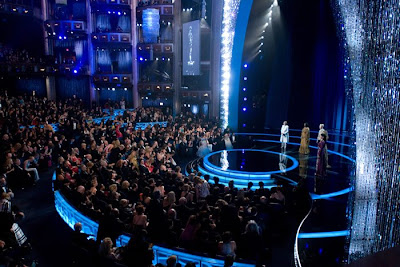 And so, with the 81st Oscar telecast come and gone, the time has come to put an end to the 2008 season.

I stand by my assertion that 2008 was a weak year for film in general. Especially in the shadow of 2007. But out of that came what is possibly the best Oscar telecast in years. It had a few hiccups (I found the 5 presenters for the acting awards to be a bit awkward), but overall the show felt breezy and fresh. There are some old trappings I missed...the clips of the nominated performances, playing selections from the film's score when it wins an award, bringing back last year's winners to present awards, but on the whole the show was fantastic. Everyone really seemed to be having fun. The atmosphere was more laid back than usual, and Hugh Jackman made for a fine, charismatic hosts. Even the presenters seemed more at ease, without the usual overripe dialogue. I loved the bits with Tina Fey and Steve Martin, as well as the musical numbers (the musical compilation with Beyonce was wonderfully nutty).

Were the 2008 Oscars representative of the best in film this year? No. Synecdoche, New York was nowhere in sight, Gran Torino was snubbed completely. But of all the nominees, the best film won in spectacular fashion, with Slumdog Millionaire racking up 8 Oscars in a good old fashioned sweep. It felt nice to be on the winning team for once...the film I've pulled for hasn't won since 2003 with Return of the King racking up a record tying 11 trophies.

There are very few wins I would change if I could. I was pulling for Meryl Streep to win Best Actress, but Winslet was overdue (even if she was better in Revolutionary Road). I was pulling for Penn, but it would have been nice to see Rourke win, as this may be his only chance at Oscar gold.

But I think when all is said and done, the 2008 Oscars were a great success, a fine send off to a rather dull and uneventful movie year. And now it's over, time to move on and look ahead to 2009. Here's hoping it's a better year for film, and that next year's Oscars lives up to this one.
Email Post