I just got finished watching Zoo, Robinson Devor's polarizing, hugely controversial documentary about a man who died of a perforated colon as a result of having sex with a horse. A film on this kind of subject isn't the kind of thing that would "play in Peoria" as Groucho Marx would say, and as such only had a very limited release in 5 theaters. And while it's subject matter may be shocking and taboo, the film itself is a lyrical, strangely beautiful thing. Devor disarms us from the get-go, we are not prepared for something so poetic to come out of such a repulsive subject. 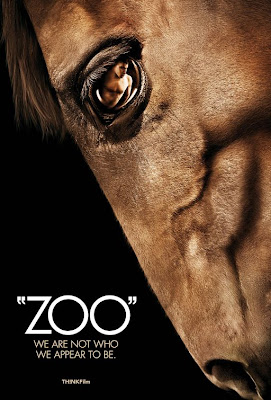 But that is where Zoo succeeds the most. It does not judge its subjects. While its focus is mainly the never-named man who died, Zoo takes us into an underground world where men gather for the purpose of having sex with animals, and attempts to at least help us understand why these men do what they do. It never asks us to condone or accept it, but it does attempt to illuminate a very real (albeit small) segment of society than many of us never even think about. And it balances it nicely with the perspectives of the vets who rescue the animals from the farm that serves as the gathering place for "zoophiles" from all over.
The part where the movie falters, however, is in its insight. These men claim to love these animals the way you would a romantic partner. But that begs the question - how can an animal consent, and how does all of this affect them? It is a question that is asked, but never answered. One side says they can, the other says they can't. But Devor never fully explores why these men do what they do - what it is that makes them feel a closer connection to animals than other humans. 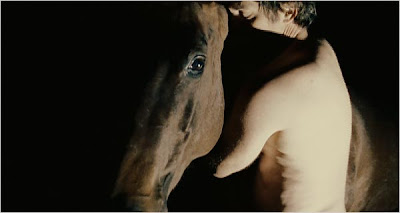 Who are these men? The film never tells us. The poster bears the tagline: "we are not who we appear to be." But we are never told who these men are outside their shadow world of bestiality. The dead man, known only as Mr. Hands, is shown to be a family man with a wife and child, but we are told nothing about his outside life, or the lives of the other men. They are defined solely by their affinity for sex with animals. As such, the movie loses its chance to explore deeper themes of lonliness and alienation that it only hints it.

To his credit, Devor handles the subject well. The film was nicknamed the "horse-fucking movie" after its debut at the Sundance Film Festival, which is unfair. It is not a graphic film at all, despite the "MATURE AUDIENCES ONLY" warning emblazoned across the DVD cover. It is delicate and haunting, an eerie mood piece that displays a keen stylistic eye on the part of Devor. But it left me ultimately unsatisfied. At only 76 minutes long, it feels slight and unfulfilling, leaving vast oceans of material unexplored. We really know no more about these men than we did before. They have sex with horses - but where's the why, where's the debate? Zoo raises all kinds of interesting questions - the kind that make you examine and question beliefs of right and wrong. But it never explores them. It asks us to examine why we believe what we believe, but it never asks the same of its subjects. What we are left with is a beautiful and quietly unnerving film about a forbidden subject...that leaves us wishing there was more to it.