Just released on DVD on Tuesday, Paul Verhoeven's Black Book is not your typical WWII movie. And its definitely not your typical Holocaust movie. But coming from the director of Basic Instinct and Showgirls, that shouldn't be expected. 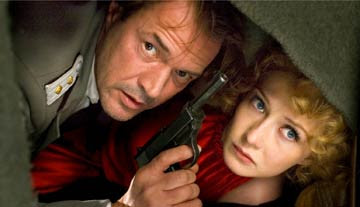 Black Book is a slickly produced historical melodrama set in occupied Holland near the end of WWII. Inspired by true events, the film tells the story of Rachel Stein (Carice van Houten), a young Jewish woman in hiding from the Nazis, who after the death of her family, joins the Dutch resistance and dyes her hair blonde to infiltrate the Gestapo headquarters, where she falls in love with the German commander of the SS.

Oh yes, it's every bit as lurid and pulpy as one would expect from Verhoeven, with its classic Hollywood production values and lush cinematography with reds that pop off the screen like the Technicolor epics of yore. And of course sex. Lots and lots of sex. But Verhoeven never cheapens his subject. Its got Hollywood sensibilities up one side and down the other (despite being a Dutch production), but he uses those to his advantage. Black Book is a thrilling, old fashioned nail-biter, filled with intrigue, suspense, and romance. 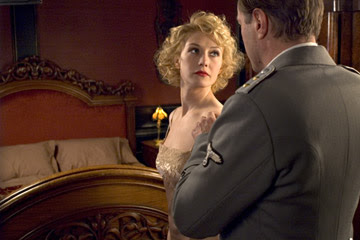 Unlike many other films on this subject, however, Black Book is an unabashed movie-movie. It's not on the level of the granddaddy of all Resistance films, Jean-Pierre Melville's mesmerizing 1969 masterpiece, Army of Shadows, but it holds its own. Realism is not Verhoeven's first concern here, entertainment value is. But he never sacrifices credibility for it. He earns his suspense honestly, through our genuine empathy for his characters. It is not as immediate or as grim as Army of Shadows, but it paints an intense portrait of the near-impossible challenge faced by the underground Resisance fighters. 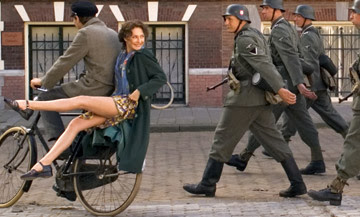 It all makes for a fantastic espionage thriller, and van Houten makes an appealing lead. It is her character we feel the most for, and she provides the backbone for the film, while Verhoeven almost single handedly redeems himself for Showgirls. The film manages to turn German occupied Holland circa 1944 into a fast-paced thrill ride without sacrificing the emotional core and very real human toll. He takes the material of throw-away beach reads and turns it into a sharply crafted, lushly filmed nailbiter with wonderfully old fashioned sensibilities. One could almost imagine Black Book being made in the late 40s sometime. It's a Hollywood throwback that out-Hollywoods Hollywood.

And in this day and age, isn't that saying something?