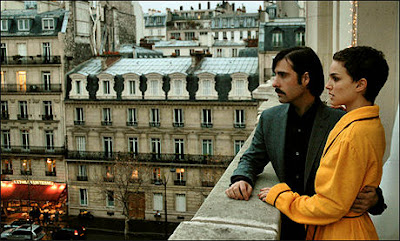 I just finished watching Wes Anderson's Hotel Chevalier, a short film billed as Part 1 of his new feature film The Darjeeling Limited (which opens in NY and LA on 9/29). It is a 13-minute long short meant to provide backstory for the film's main character, played by Jason Schwartzman, and is being shown in front of press screenings of the film and is set to be included on the DVD. It's an interesting film, especially from a compositional standpoint (which is, as usual, stellar - and unmistakably Anderson), well acted and sharply written by Anderson. It left me wondering what the history of the characters were, which I hope we will find out in Darjeeling. Think of it as a teaser that doesn't actually show any of the film its teasing. A definitely unique little film.

The film, which also features Natalie Portman, is now available as a free download on iTunes, which you can get by clicking here.
Email Post