The reviews are pouring in, and Joe Wright's Atonement is looking to be the year's first serious Oscar contender.

Rarely has a book sprung so vividly to life, but also worked so enthrallingly in pure movie terms, as with “Atonement,” Brit helmer Joe Wright’s smart, dazzlingly upholstered adaptation of Ian McEwan’s celebrated 2001 novel. Period yarn, largely set in 1930s and ‘40s England, about an adolescent outburst of spite that destroys two lives and crumples a third, preserves much of the tome’s metaphysical depth and all of its emotional power. And as in Wright’s “Pride & Prejudice,” Keira Knightley -- echoed by co-thesp James McAvoy --proves every bit as magnetic as the divas of those classic mellers pic consciously references. 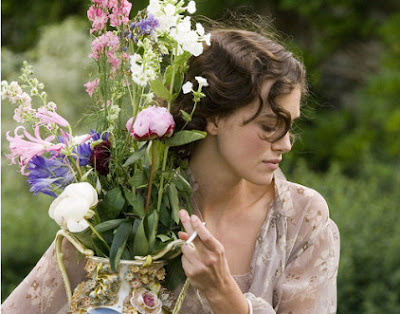 "Atonement," Ian McEwan's best-selling novel of love thwarted by juvenile fantasy, has been rendered on screen so well by director Joe Wright and screenwriter Christopher Hampton that it ranks with the best novel adaptations of recent times... With compelling and charismatic performances by Keira Knightley and James McAvoy as the lovers, and a stunning contribution from Romola Garai as their remorseful nemesis, the film goes directly to "The English Patient" territory and might also expect rapturous audiences and major awards.

It's a rave! Let the race begin...
Email Post