Ruben Östlund is one of those highly acclaimed filmmakers whose popularity has mostly baffled me over the course of his career. I found Force Majeure and the Palme D'Or winning The Square not half as clever as they think they are and about half as funny as they want to be. No one can fault Östlund for lack of ambition, his satires aim big - which is perhaps where the issue lies for me. The targets are too big and the execution too broad to truly land with the bite Östlund seems to be aiming for. 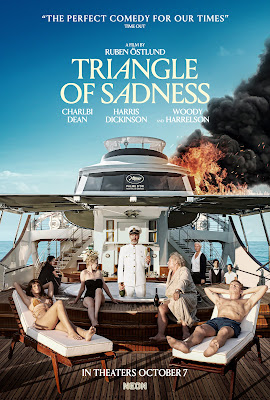 So the news of yet another Östlund satire taking the Palme D'Or at Cannes so soon after The Square (2017) filled me with trepidation. Would this finally be the Östlund I connected with? Would I finally get what everyone else sees here? Surely a filmmaker who's taken home two Palme D'Ors in 6 years should be someone who makes me sit up and take notice.

Ultimately, I found Triangle of Sadness to be his most accomplished work to date. Östlund's incredibly dry sense of humor makes the film's broader, more absurdist touches work here in a way they never quite did in his previous films. Despite the title, it's a very funny film, and it's hard to go wrong when your basic theme is "eat the rich." The story unfolds in three parts - each following the misadventures of a couple of attractive young influencers (Harris Dickinson and Charlbi Dean) who spend their time trotting across the globe trying to look rich while bickering about who's going to pay for their latest expensive, Instagram-ready meal. Things begin to go wrong, however, when they board a luxury yacht where the crew can't say no to the wealthy guests, leading to increasingly absurd requests, and eventually, disaster.

The middle sequence on the yacht is perhaps the film's strongest aspect. The absurdity of the wealthy passengers' requests coupled with their general obliviousness to the world around them is skewered mercilessly and to great comedic effect (Woody Harrelson as the yacht's drunken, communist captain arguing politics with a slimy Russian capitalist is an utter delight). The segment on the island, however, as the group's power dynamics flip, reaches for a kind of pathos its never quite able to achieve, despite the excellent efforts of Dolly de Leon as Abigail, the maid who suddenly finds herself in charge.

The film's fatal flaw is its length. At nearly two and a half hours long, Triangle of Sadness' satiric aims just can't sustain the weight of its own ambitions. There's a lot to like here, with a potentially better, shorter film lurking amidst its excesses. So I wouldn't say Östlund has won me over quite yet - but I'm starting to see the appeal, even if it's still altogether too disjointed for this critic's tastes.