Much has been made about Bros' history-making debut. First it was the first gay rom-com, then the first gay rom-com from a *major studio,* and while it's true - I want to live in a world where queer themed movies are just as commonplace as the straight ones that we're inundated with on a weekly basis. But to pretend that Bros is the first of its kind is to ignore movies like Love Simon, The Happiest Season, and Fire Island (which was released just this year). And while some of those were streaming releases, Bros' outsized view of its own place in history is perhaps its greatest downfall.

Set in and around an LGBT history museum, Bros follows the misadventures of a queer history podcaster named Bobby (Billy Eichner, who also co-wrote the screenplay with director Nicholas Stoller), whose efforts to open the museum are constantly being thwarted by lack of funding or infighting amongst the queer factions who all want there specific group to be the focus. All the while he's trying to navigate the all-but-impossible gay dating scene, leading to a series of unsatisfying Grindr hookups that never go anywhere. All of this has left Bobby quite cynical, that is until he meets Aaron (Luke Macfarlane), a ripped bro-type who Bobby immediately writes off as a vapid muscle gay but who turns out to be something much more. 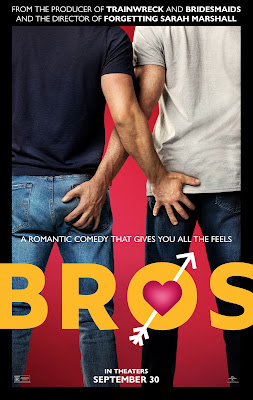 Bros actually nails a few things about queer dating in the modern world, but its humor is very much inside baseball. Its insular sense of humor might translate to a very online brand of queer folk, but it's over-reliance on inside jokes have all but doomed its crossover appeal. And while I very much appreciate queer films that refuse to tone themselves down to appeal to straight audiences, it's easy to see why BROS is not exactly the massive hit that the studio might have hoped.

But Bros' biggest sin remains its fairly shameless attempts to carve out its own place in queer history. Setting the film in an LGBT history museum was already pretty on-the-nose, but its constant name-dropping of LGBT icons and trailblazers makes it clear that it fancies itself an educational piece as much as a romantic comedy. It's not just a romantic comedy, you see, it's the first gay romantic comedy from a *major studio* to be put out in wide theatrical release. It is making history with a capital H, and while it's got your attention, it's going to teach you a thing or two about queer history. Bros wants to have its cake an eat it too, and its that awkward mix of comedy and earnestness that is its ultimate undoing.

Eichner actually has a few fairly funny insights about the state of gay dating and the overwhelmingly white and body conscious state of Grindr culture. The idea that queer people not needing to apologize for taking up space in the world is a strong one, and Bros is certainly unapologetic in its queerness and isn't trying to bend over backwards to make straight audiences comfortable. But while it loves to namecheck queer trans women of color (and it has a few!), its milieu is still overwhelmingly white and cis, comfortably settled in the insular white muscle gay community it aims to satirize.

There are a few laughs to be had here, but in the end, it all feels very surface-level - conflicted from the top down about whether or not it wants to feel like just another romantic comedy (but GAY) while also wanting to remind the audience that it represents a seismic shift in major studio filmmaking. Unfortunately, it's neither smart enough or funny enough to full execute either, and ends up doing little else but reminding us that us queer folk need our mediocre comedies to roll our eyes at too.