So much internet speculation has swirled around the reported behind-the-scenes drama of Don't Worry Darling that it's almost easy to forget that there's an actual movie here at the center of it all. It's never a good sign when a movie's production becomes more of a story than the film itself, but in the case of Don't Worry Darling, it ultimately feels like it was neither worth all the hype, nor was it as bad as the supposedly messy production would lead one to believe. 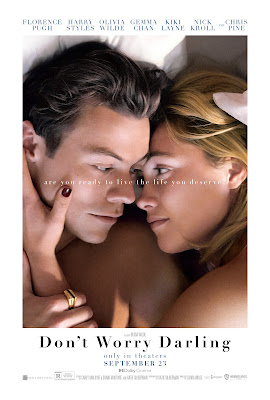 Set in an eerily idyllic community in the desert, Don't Worry Darling centers around a group of housewives living out a seemingly "idyllic" 1950s existence - staying home to cook and clean while their husbands leave every morning to go work on the top secret "Victory Project." Is it a government secret? A secret weapon for the military? Something even more sinister? Alice (Florence Pugh) finds herself asking more and more questions - until she discovers something in the desert that will change her perception of her world, and her existence, forever.

Make no mistake, this is Pugh's show, and she carries this film with an almost herculean strength. And if you take it at face value, Don't Worry Darling is a mostly agreeable paranoid thriller about patriarchal gaslighting and institutionalized misogyny. The problem is that it doesn't hold up to very close scrutiny. Its themes are half baked at best, and in its zeal to be white lady Get Out, it neglects many of the elements that made that film such a success - namely a sense of humor and a strong point of view.

You see, and this is where the spoilers begin, it turns out this whole world is a digital creation of the modern world, a kind of metaverse prison where men imprison their wives and turn them into idealized 1950s housewives and they can live the king of their castle life they've always fantasized about. Director Olivia Wilde made quite a big deal about the fact that men don't cum in this film, that female pleasure is the focus. But if every sexual act in this film is indisputably a rape - celebrating that seems directly at odds with the film's thematic content.

Therein lies the biggest problem with Don't Worry Darling - it doesn't really seem to know what it's trying to say. Pugh is putting on a great show, and Wilde is likewise terrific in front of the camera (the less said about Harry Styles' non-presence the better), but thematically it's all over the place, never quite figuring out how to synthesize its ideas in a coherent or satisfying way. Wilde certainly has some filmmaking chops, but the attention to detail here is lacking and the world it depicts not fully realized. It turns out that the behind-the-scenes drama, real or imagined, was far more interesting than anything that ended up on the screen.