New On Blu-Ray | Dr. Jekyll and Mr. Hyde, Mark of the Vampire 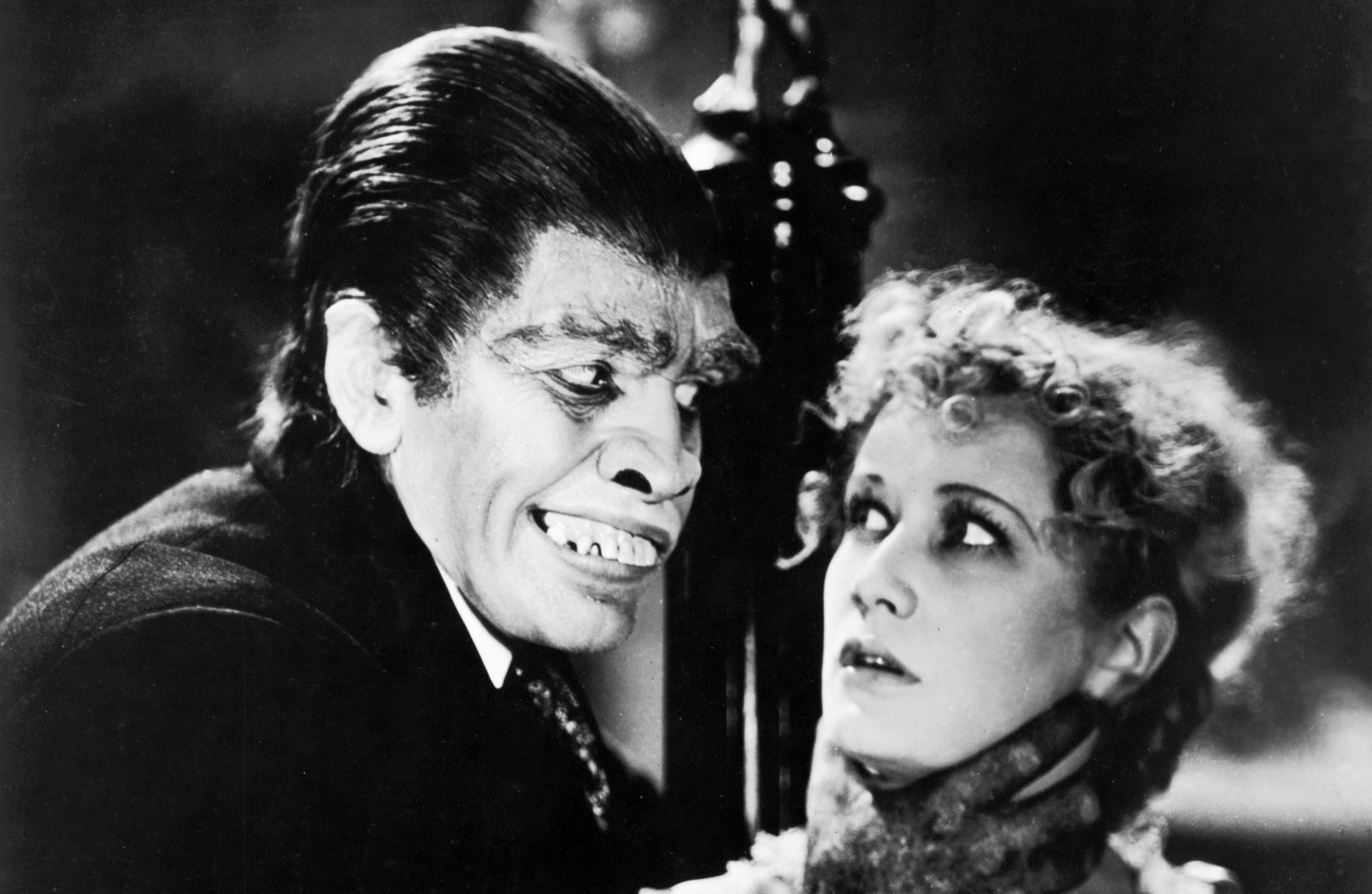 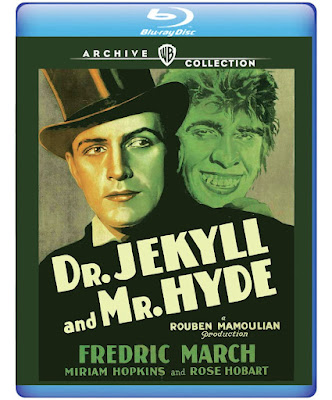 MGM reportedly tried to suppress this film for many years when it made its own version of Robert Lewis Stevenson's Dr. Jekyll and Mr. Hyde in 1941. And it's easy to see why - Rouben Mamoulian's 1931 version is easily the superior film, and Frederic March's Academy Award winning performance in the titular roles remains the definitive screen portrayal of the legendary character.
The story is familiar - a kindly doctor theorizes that everyone has a good and evil part of themselves and crates a serum designed to isolate and separate them. The problem is it turns him into a sociopathic monster who attacks the innocent without conscious - eventually holding a young prostitute hostage while his kindly alter ego prepares to be married to the woman he loves. Mamoulian's pre-code film doesn't try to shy away from the more lurid elements of the story the way that Victor Fleming's remake does, and the result is something altogether more eerie and frightening. And the innovative visual effects, which employed makeup that only showed up under certain color lighting, still hold up today.
What makes Dr. Jekyll and Mr. Hyde so uniquely disquieting is the suggesting that the capacity for great evil lurks inside all of us - Hyde isn't so much a monster as he is an intrinsic part of Dr. Jekyll, and Mamoulian's film deals with that dichotomy well.
The new Blu-Ray from Warner Archive is perhaps one of the most stunning restorations of a film from this era I have ever seen. The image looks brand new, there's not a trace of damage to the negative, very little noise, but not so smoothed out as to look unnatural. It’s absolutely pristine; like seeing a brand new original print in 1932. This one is easy to recommend, especially so close to Halloween. It's one of Warner Archive's finest achievements. 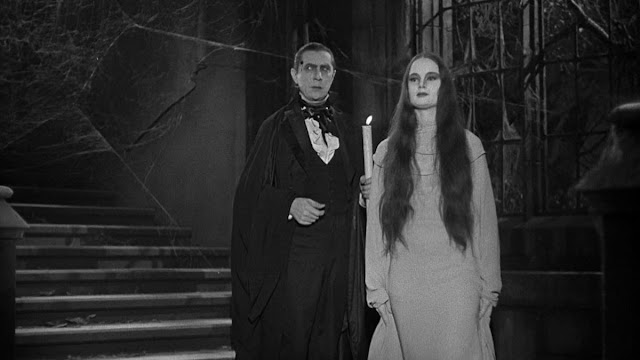 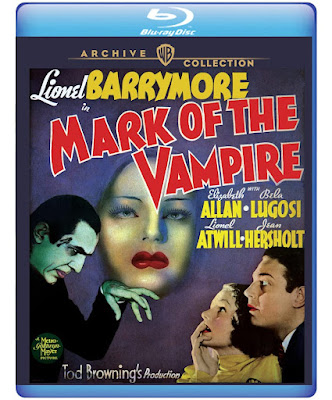 Not to be outdone by the burgeoning horror genre spearheaded by second-tier upstart Universal, prestige studio MGM decided to capitalize on the popularity of their monster films by hiring Dracula filmmaker Tod Browning to reunite with his star, Bela Lugosi, to deliver a new vampire film about a mysterious Count preying on provincial villagers from his forbidding castle.
Mark of the Vampire starts out as an almost defect remake of Dracula, or at least the sequel Lugosi never got, featuring some of the same villagers warning travelers to stay indoors at night and away from the castle of Count Mora. The castle itself is like a smaller version of Dracula's, complete with the same massive spider webs and menagerie of spiders and possums crawling through the ruins. This time, however, the Count is given a "daughter" in the form of Luna (Carroll Borland) who preys on the young women of the village. Her newest target is Irena (Elizabeth Allan) the daughter of a local nobleman who was killed under mysterious circumstances the previous year, with two unexplained puncture wounds on his neck. This brings Inspector Neumann (Lionel Atwill) and Professor Zelin (Lionel Barrymore) on the case, one a vampire skeptic, the other a true believer, to get to the bottom of the crime, leading to an unexpected revelation that turns the entire film on its head.
That's where the film diverges most from Dracula. In fact, Browning's last-minute twist was kept such a secret that not even the actors were let in on it, leading them to play their roles completely straight until the last minute. Suffice it to say that this is not a traditional vampire film, even if it has all the trappings of one, but it's clear that's exactly what the actors thought it was. Lugosi's role is mostly silent until the last minute or so of the film, and he spends most of it standing around looking menacing. What really distinguishes the character of Count Mora from Count Dracula, however, is the conspicuous bullet wound on the side of his head that is never mentioned in the film at all. It is said there was a subplot that suggested that he had been shot because of a romantic relationship with his own daughter, but that it was excised by MGM before the film was released, which explains why the film is only an hour long, rather than the reported 80 minute runtime it was reported to have at the time. The missing 20 minutes of the film have never been found or released, so it's impossible to know what they contained, but it definitely feels like something is missing, with the action in the film's final act feeling especially truncated.
The big twist also makes little sense, turning an otherwise straightforward horror picture in the Universal style into a convoluted detective story buried under a layer of overly complicated intrigue. One can't help but wonder if those missing 20 minutes would have fleshed out the narrative a bit more, because as it stands it feels slightly stunted, an evocative and atmospheric pseudo-remake of Dracula whose power was ultimately undercut by studio meddling. It's important to remember that those early Universal horror films - Dracula, Frankenstein, The Mummy, and The Invisible Man were all released before the adoption of the Hays Code. The cuts to Mark of the Vampire were likely the result of MGM's nervousness about the newly adopted Code, and Browning, whose last film, Freaks (1932), was a major flop for the studio, was powerless to stop it. Still, his knack for crafting eerie atmospheres is on full display here, and the eerie cinematography by James Wong Howe rivals and at times surpasses Karl Freund's work on the original Dracula, awash in deep shadows and creeping fog.
In a world where Lugosi never got a proper sequel in which to reprise his most iconic role, Mark of the Vampire scratches a certain itch. But in its truncated state it feels more like the scraps of a much better film,  a victim of the Production Code whose true form may never see the light of day.