The Halloween series, like all slasher franchises, has historically been a wildly mixed bag. In 2007, Rob Zombie took the series in a bold new direction with his remakes (his Halloween II is as close to a masterpiece as the franchise has gotten since Carpenter's original), before David Gordon Green decided to wipe the slate clean and return with a trilogy of legacy sequels to the original film that ignored all the other films that came between. 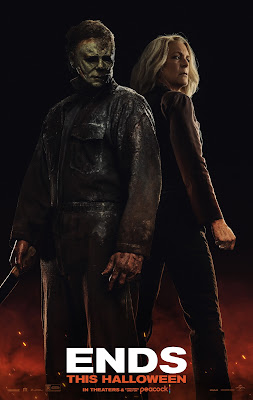 Green's Halloween films are certainly more serious minded than most of the sequels, attempting to grapple with the ripple effects of the trauma wrought by Michael Myers' bloody rampage through Haddonfield on Halloween night decades ago. In Halloween (2018), Gordon focused on the family of Laurie Strode (Jamie Lee Curtis) and how generational trauma affected the lives of three women both directly and indirectly affected by the massacre. In Halloween Kills (2021), he examined how the trauma of the massacre had affected the town of Haddonfield. And in Halloween Ends, he combines those two ideas to examine how society creates monsters through neglect born out of fear and mistrust. This time this monster isn't just us (as it was in Kills), it is society at large, cruelly creating the next Michael by turning on the vulnerable.

Halloween Ends also allows Laurie Strode to find a measure of catharsis and redemption that has long been denied to her character over the last 40 years. It's a lovely swan song for Curtis (much stronger than her ignominious end in the execrable Halloween Resurrection). But the stronger storyline belongs to newcomer Corey Cunningham (Rohan Campbell), a teenager who becomes something of a town pariah after the child he's babysitting dies in a freak accident. Hoping to overcome his dark past, he starts seeing Laurie's granddaughter, Allyson (Andi Matichak), but the town's incessant fear pushes him to the brink, leading him to try to take up the mantle ofd the town's chief boogie man, Michael Myers, who hasn't been seen in years yet still holds the town in a grip of fear.

The film doesn't always handle its themes with grace, but you have to admire the boldness with which it eschews the established slasher tropes that the original Halloween all but invented. In that regard, Halloween Ends is less of a slasher than a character drama, its characters grappling with the fallout of years of trauma and still fresh wounds of the recent terror of Michael's escape and the ensuing mob he created. Michael very much takes a back seat in this entry, and that feels right somehow. It's the specter of Michael that does more damage to the town than Michael himself - and Laurie is determined to shatter his hold over the town once and for all and show everyone that sometimes our most feared monsters are just pathetic old men hiding behind a mask.

There are a lot of interesting ideas floating around in Green's Halloween films. I don't think they always come together in the most intriguing ways, and they certainly lack the stylistic flair and psychological acuity of Zombie's entries, but there's something uniquely mournful about what Green achieves in Halloween Ends. It's less interested in the shameless nostalgia of its predecessor and more concerned with reflecting on its own place in a legacy of terror that mythologizes madmen. I wish the film had tied its disparate ideas together more cleanly, but it's difficult to not be fascinated by what Green has done with Halloween over the course of three very different films. I'm sure we haven't seen the last of Michael Myers as a character, but for now, the final chapter in this particular trilogy isn't afraid to ask interesting questions, even if the answers might not be as satisfying as one might wish.