It's baffling to me that the superhero genre continues to thrive and dominate the cinematic landscape if films like Black Adam are the standard. It's a film so basic one could almost recite it word for word in the theater having never seen it before. If you've ever seen a superhero movie, you've seen Black Adam. Hell, if you've ever seen any kind of movie, you've seen Black Adam, because it's one of the most basic iterations of Joseph Campbell's hero's journey we've seen in quite some time. 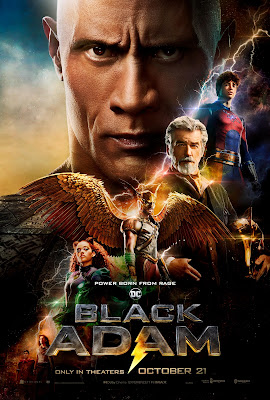 There's our anti-hero, Teth-Adam (Dwayne "The Rock" Johnson), ancient protector of the fictional Middle Eastern kingdom of Kahndaq, who is reawakened after 5,000 years, and must learn how to become hero rather than a vengeful anti-hero. There's the wise old sage (Pierce Brosnan) sent to capture him who ends up as his mentor and guide (and *SPOILER* won't live to see the end credits) and of course the plucky sidekicks who help him on his quest. They're all after an all powerful object, of course, in this case a crown infused with demonic power that is being sought by nefarious forces who seek to subjugate Kahndaq once again.

The outcome of all this is never in question, of course. The plotting here is so basic any third grader could explain the story beats before they happen. Which is a shame because director Jaume Collet-Serra is a gifted craftsman who deserves much better than this, because his talents are both wasted and buried beneath layers of ugly CGI, an overbearing score, and a story that makes the proverbial dull dishwater look positively vibrant.

Does anyone actually care about these movies? How many times can you watch the same thing over and over before getting tired of it? Do audiences really not want something that's actually surprising? Or are studios just lazy, continuing to churn out formulaic dreck because it's tried and true and they know it sells tickets? Everything about Black Adam is bullshit - there's no heart, no soul, not an honest moment in the whole thing. Johnson does his best -  and he's undeniably magnetic, especially in Adam's early, more ominous scenes that allow him to try on a new screen persona for a bit. But by the time the villain finally shows up in the final act, it's almost impossible to care about any of it because we've seen it all before in movies that weren't nearly so goofy. Black Adam is as paint-by-numbers as these things get.