In some ways, we've reached a point in the Marvel Cinematic Universe that feels like if you've seen one of these things, you've seen them all. We are now in the so-called fourth phase of the MCU, which has been a decidedly mixed bag, but there have been some bright spots in the form of Eternals and Shang-Chi and the Legend of the Ten Rings. When Marvel focuses on a standalone story that doesn't feel like an extended trailer for the inevitable next installment, interesting things tend to happen. 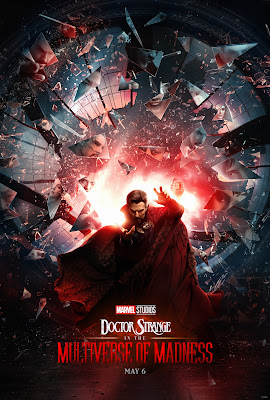 Doctor Strange in the Multiverse of Madness has a foot firmly planted in both camps, as it brings some much needed directional flair to the MCU courtesy of Sam Raimi, while remaining frustratingly confined by the needs the overarching franchise. Raimi is no stranger to Marvel, of course, having directed the original Spider-Man trilogy 20 years ago, and he breathes some much needed life into the tried and true Marvel formula. The problem is that so much of the film's emotional core depends on how familiar the audience is with the Disney+  TV show, Wandavision, which sets up the arc of the film's villain, Wanda Maximoff/The Scarlet Witch (Elizabeth Olsen). While other Marvel shows are certainly a factor here, none of them loom as large as Wandavision, and it's so integral to the plot one can't help but wonder how the film holds up for viewers who are only watching the movies and not the myriad MCU TV shows that make it feel as if one has to do a lot of extracurricular homework just to keep up the latest blockbusters.

Of course, this is a franchise that is  28 movies deep at this point, so if you're just coming in now you're likely to be lost with or without Wandavision - which is what makes more self-contained narratives like Eternals or Shang-Chi more enjoyable. The film picks up soon after the events of Spider-Man: No Way Home, with Dr. Strange (Benedict Cumberbatch) dealing with the continued fallout from the multiverse incursion in that film. He meets a young woman by the name of America Chavez (Xochitl Gomez), who has the power to move between universes but doesn't know how to control it. So he seeks help from Wanda, only to discover that she wants to take America's power for herself, which would cost America her life, so she can go to a universe where her imaginary children are, in fact, real. So Strange and America go on a journey across universes to escape the wrath of the Scarlet Witch, whose growing power threatens to destroy them all.

Under Raimi's direction, Doctor Strange in the Multiverse of Madness takes on the timbre of a horror film, and Raimi is clearly having a blast playing with some delightfully gruesome ideas that recall his early work in the Evil Dead films. There are evil spirits, marauding demons, and even reanimated corpses, not to mention a battle between multiple Dr. Stranges using animated musical notes as weapons, that is perhaps one of the most conceptually thrilling set pieces to ever grace the MCU. But for every fun Raimi touch, it's hard to escape the feeling that this is would have been a more interesting film overall if it weren't so tied into to the ever-growing Marvel tapestry that has become too unwieldy for its own good. The slyly devious Raimi finale is almost immediately undercut by the requisite mid-credits stinger setting up the next installment. The needs of the franchise always supersede the needs of the individual film, and rarely is that more apparent than here. It's a fascinating study in tension between filmmaker and producer, where a director's singular touches are constantly being curbed to serve the bigger picture of the most lucrative franchise in cinema history.

It's a shame because there really is a lot to like here. Raimi's clearly enjoying playing in this sandbox, Olsen gives one of the franchise's most layered performances, and it's fun to see MCU break out of its often drab visual palate, but it's difficult for a film like Multiverse of Madness to truly stand on its own. It's ultimately just another cog in a massive wheel of storytelling by committee, and while Raimi does his best with the hand he's dealt, one can't help bit wonder what this would have looked like if he'd truly been given free reign. Still, this is about as fun as these movies get, even if this never-ending story has long overstayed its welcome.