Alex Garland is one of those filmmakers whose work tends to inspire rapturous praise in certain critical circles that I've just never been able to fully connect with. There are certainly elements of Ex Machina and Annihilation that I enjoyed, but I've always felt as though the brilliance often described by some critics is really just opaque obfuscation designed to be just vague enough to make people think they're in on a profound secret that isn't actually all that deep. 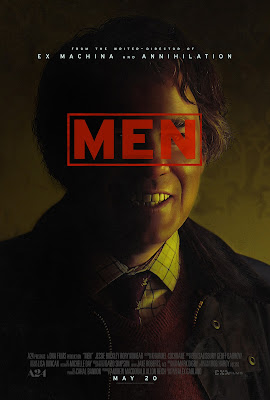 These issues seemingly came to full fruition in Men, Garland's first foray into the horror genre after his twin sci-fi hits, a film that purports to have its pulse firmly on the political zeitgeist, but comes across more as a weakhearted attempt at topicality that doesn't have nearly as much to say as it thinks it does. Jessie Buckley stars as Harper, a woman who rents a house in the English countryside to recover from the recent suicide of her husband. Everything seems to be going well, until she begins to notice that a strange man is seemingly following her everywhere she goes. And every man she encounters has the exact same face (Rory Kinnear), each one becoming an unexpectedly toxic presence in an otherwise idyllic weekend. As the encounters grow ever stranger and more threatening, it becomes clear that these men are bent on dredging up old traumas from which she cannot escape.

Men is ultimately a film about the horrors of the seemingly never-ending cycle of patriarchal violence perpetuated against women. There's certainly an unnerving idea there, and Garland excels at creating a decidedly off-kilter sense of dread that permeates every frame. The problem here is that the themes feel much more shallow than the profundity with which they're treated. The climax feels like a less-engaging retread of Natalie Portman's confrontation with herself at the end of Annihilation, and Garland paints with the broadest possible brush while ultimately saying very little. The film traffics a kind of superficial gender essentialism that makes its themes feel more didactic than incisive, a reduction of thorny ideas to their most simplistic iterations, disguising its lack of depth with bizarre imagery and laborious "elevated horror" portent that are becoming somewhat tiresome.

It certainly has its disturbing moments, but it's trying so hard to say *something* that it barely says anything at all. It seems designed to appeal to a very specific kind of Twitter user, but I've seen Twitter threads with far greater insight into toxic masculinity than anything present in Men. It almost feels as if it's trying so hard to be smart that it seems to confuse itself more than it baffles the audience. Its feigned ambiguity is more tedious than mind-blowing, and despite strong performances by its two leads, the mysteries at the heart of Men ultimately aren't that interesting. It feels like a wasted opportunity at nearly every level, and no amount of beautiful cinematography and haunting music can elevate this overly self-serious horror dud.