Godzilla: King of the Monsters is perhaps the first American kaiju film (a genre term meaning "strange creature" in Japanese) that really understands the genre's aesthetics. The Japanese have been making movies about giant monsters fighting each other for over half a century, and American filmmakers have long tried to emulate them, but the results have historically been mixed. Whether they're recutting the Japanese films for American audiences or remaking them outright, Hollywood has never quite managed to capture the sheer sense of lunacy that make these films so entertaining. 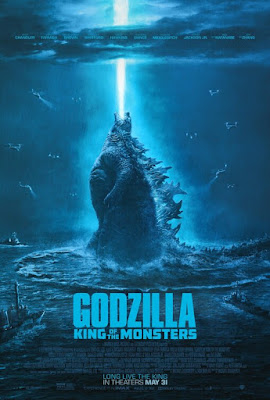 The 1956 American recut of the original 1954 Godzilla, Godzilla, King of the Monsters, remains one of the most egregious and laughable examples of cultural appropriation in cinema history, completely obliterating the original film's elegiac beauty and nuclear allegories, instead turning it into the badly dubbed joke that has informed many Americans' perception of the genre to this day. Thankfully, the original Japanese versions of the Godzilla films (there are 29 in all) have become more widely available in recent years, revealing a wealth of monster-on-monster action to American audiences for the first time so they can finally be seen as they were intended.

Now we come to 2019's Godzilla: King of the Monsters  the sequel to Gareth Edward's American Godzilla reboot from 2014, which pits the giant lizard against his greatest foe from the original films - King Ghidorah, a three-headed dragon from outer space. Along for the ride are the fire fearsome flying "fire demon" Rodan and the luminous Mothra, all staples of Toho Studios' original kaiju lineup. Much has been made about the film's over-reliance on the human drama revolving around a broken family and a nefarious plot by eco-terrorists to unleash monsters upon the world to restore "natural balance." Yet it is this outlandish plot that surrounds the kaiju action that makes it feel the most like its Japanese counterparts. It combines the ridiculous human plots and rear-loaded structure of the Shōwa-era films (1954-1975), combined with the darker tone and more epic sense of action of the Heisei-era films (1984-1995).

King Ghidorah first appeared in 1964's Ghidorah, the Three-Headed Monster (the Shōwa era's fifth film), and would go on to terrorize Godzilla in numerous other films throughout the series. Ghidorah was the first film in which Godzilla appeared as a heroic character, teaming up with Mothra and Rodan to save the earth from this extra-terrestrial foe. Godzilla: King of the Monsters shares a lot of DNA with this film, which featured a plot about foreign assassins trying to kill a queen, who loses her memory and returns as a Venusian to warn earth of its impending doom. The Shōwa plots got increasingly convoluted as they went along, but they were so much fun, and that is exactly what director Michael Dougherty (Trick 'r Treat) delivers here.

The plot is full of wild twists and outrageous conspiracies, and it’s often drunk on its own lunacy (they go to Atlantis!), and while it may be as well-directed as 2014's Godzilla (which felt like a war movie with giant monsters), it captures the Toho spirit more than any other American iteration of this character. Composer Bear McCreary even brings back Akira Ifukube's immortal "Godzilla Theme" and Yūji Koseki's "Mothra's Song" to represent their respective characters. The film balances its convoluted plot with some truly breathtaking imagery and bone-crushing kaiju battles that actually take into account the brutal real-world consequences of urban smackdowns between giant monsters. While Dougherty sometimes loses sight of the finer points of the story he's telling (he kills a major character off-screen in such a confusing manner that he has to show their face on a screen with the word "deceased" next to it in the very next scene), story was never really the reason people came to kaiju films. These are films about giant monsters battling to the death, and on that front Godzilla: King of the Monsters delivers in spades.

Godzilla (2014) may be the more elegant film, more organic and grounded, but Dougherty's fantastical, no-holds-barred take is the kind of epic monster showdown that fans of the original Godzilla films have longed for. Its titanic, elemental battle sequences truly feel like an apocalyptic clash of ancient gods, taking us all to monster movie heaven.