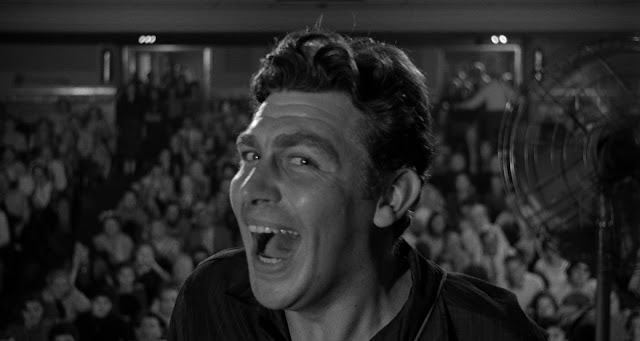 An entertainer rises from obscurity, bolstered by a fascinated media and a fawning public, to become formidable political demagogue who spouts hollow "man of the people" populism as a means to power. 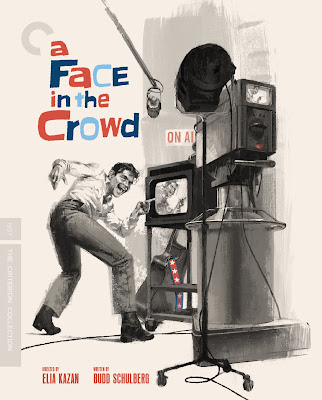 Sound familiar? Cinephiles were quick to point out the eerie parallels between Andy Griffith's Larry "Lonesome" Rhodes from Elia Kazan's 1957 film, A Face in the Crowd, and Donald Trump in the run-up to the 2016 election. And while there are certainly some differences, it's hard to ignore the striking similarities. Here's populist sensation born out of near-constant, uncritical media attention, who becomes a monster; drunk on his own power and his ability to sway the public through plain-spoken faux-folksy pablum and preying on the insecurities and prejudices of a naive public.

It's part of what makes A Face in the Crowd such a ferociously prescient picture, as if Kazan somehow peered into the future and saw what was coming - a perfect storm of unchecked power and a complicit media. It recalls Billy Wilder's Ace in the Hole (1951) in its pitch black emulation of a future it couldn't possibly know, but presages anyway. Griffith, making his film debut here, is a wonder, making the most of his unique, down-home charm and giving it a sinister spin. We're a long way from the noble "sheriff without a gun" of The Andy Griffith Show. Kazan was known as an actor's director, and what he pulls out of Griffith is extraordinary - even reportedly going so far as to get Griffith drunk for his fiery final scene. Yet the film really belongs to Patricia Neal as Marcia Jeffries - the reporter turned lover turned unlikely hero who discovers, cultivates, then ultimately brings down "Lonesome" Rhodes. Her character arc, as she slowly begins to realize what she has unleashed upon the world, is a thing of great and terrible beauty - bringing into sharp relief the unique talent that Kazan had with actors.

A Face in the Crowd unfolds like a play - the screenplay by Budd Schulberg (On the Waterfront) humming with a kind of rough-hewn power. It has never felt more relevant than it does today, and one almost wishes that some intrepid theater artist would adapt it for the stage to comment on our current times. Yet its new Blu-Ray treatment from The Criterion Collection brings it to life at a time when the world needs it the most. It's a haunting satire of America's fascination with celebrity and the power of the media to create uncontrollable sensations whose lust for fame and power become vicious cycles - fueled by media attention and the public's lust for a juicy story and a charismatic star. Here in 2019 we may be wondering where our Marcia Jeffries is to expose Trump's true nature to his supporters. But while the revelation of Rhodes' distain for them rubes who follow him is ultimately his undoing, one has to wonder if Kazan and Schulberg's dark vision wasn't too hopeful about human nature in the end. In 2019, we have to wonder if anything matters at all. The film's most nagging idea is that maybe A Face in the Crowd didn't take the satire far enough.