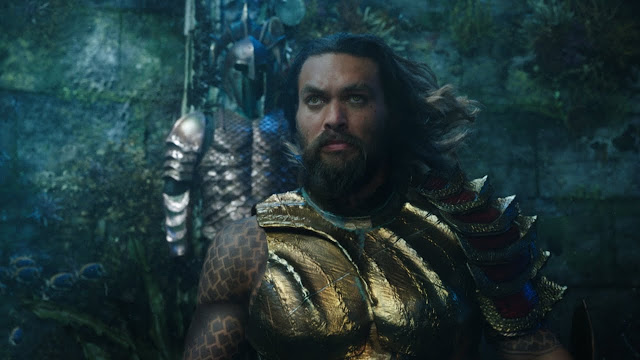 Perhaps the best thing DC currently has going for it is the lower expectations one has going into their films than one of Marvel's. While Marvel's consistently high standards continue to yield strong results, DC's mixed track record when it comes to their films, not to mention their backwards approach to creating a cinematic universe, has resulted in some decidedly underwhelming films.

While Man of Steel and Wonder Woman were both strong films, DC's attempts at world-building in Batman vs. Superman: Dawn of Justice, Justice League, and Suicide ranged from mediocre to painful, leaving the future of the series in doubt. While DC hasn't learned from all of its mistakes, they have shown a penchant for recruiting top-notch talent behind the camera, hiring Patty Jenkins (Monster) to helm Wonder Woman and Wonder Woman 1984, Ava Duvernay (Selma) to adapt New Gods, and  James Wan (The Conjuring) to tackle their latest big screen extravaganza, Aquaman. Aquaman is perhaps one of the comic giant's more obscure superheroes, but in casting the ever-popular Jason Momoa, fresh of his stint as Khal Drogo in HBO's Game of Thrones, DC scored a coup that has pushed the character to new heights of popularity. Momoa is indeed charismatic as the reluctant underwater king, who must return to Atlantis to claim the throne from his evil half-brother, King Orm (Patrick Wilson). It's a narrative that borrows heavily from everything from Shakespeare's "Hamlet," to Marvel's Thor: Ragnarok, to Dreamworks' How to Train Your Dragon 2, peddling a tired story of reclaiming a throne in a mythical kingdom that has been done so many times at this point that's it's hard to tell what is being stolen from anymore.

The film's lack of originality is hampered by a tired screenplay that claims no less that 5 credited writers, and it definitely has that "written by committee" feel, cribbing liberally from other superhero origin films while bringing very little new to the table. Aquaman attempts to stuff so much backstory and ham-fisted mythology into its inflated runtime (2 hours and 23 minutes!) that it would be possible to excise at least 30 minutes from the film without taking anything essential away from the overall plot.

To his credit, Wan seems to understand the inherent goofiness of the entire premise (the film's villain, Black Manta, looks like a rejected Power Rangers villain), and directs the hell out of it. His fluid sense of storytelling keeps the flashbacks and digressions from becoming too unwieldy, and he stuffs the frame with so much business that it's almost shocking that the film doesn't buckle under the weight. As a result, the action sequences are just so gleefully bonkers that one can't help but get swept up in it, the film's climax becoming a vibrantly unhinged set piece that goes for broke and actually out-Bays Michael Bay, throwing in everything but the kitchen sink while maintaining focus on what's most important in the frame.

Wan does his best with the cards he was dealt. Aquaman is a fairly standard superhero yarn Wan uses as a playground. He's clearly having a blast, and his sense of fun is infectious, even if underneath the flashy action sequences the film itself is incredibly rote. Yet it's hard to say no to a film with a cast that includes Nicole Kidman, Willem Dafoe, and Julie Andrews as a massive sea monster. It may be all flash and no substance, but it's some pretty damn impressive flash.