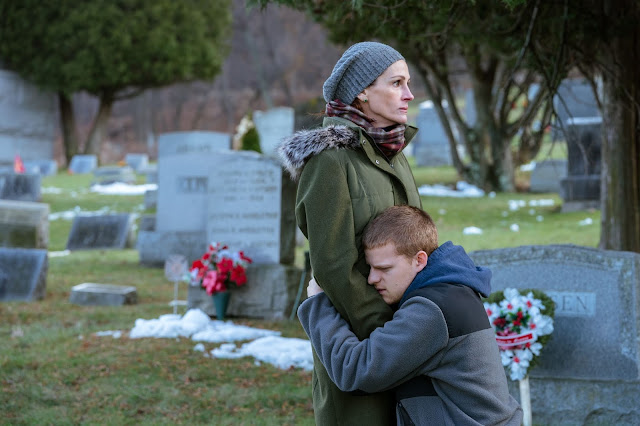 There are few actors who have risen to ubiquity in recent times quite as quickly as Lucas Hedges. Hedges, who burst onto the scene in 2016's Manchester by the Sea (a performance for which he earned an Academy Award nomination), has had prominent roles in five films in the ensuing two years (two of which were Best Picture nominees), and three this year alone: Mid90s, Boy Erased, and Ben is Back. 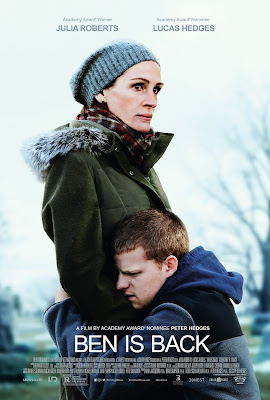 Of the three films, Ben is Back is perhaps the most personal for the actor. Written and directed by his father, Peter Hedges, Ben is Back is a searing family drama about a young drug addict named Ben Burns (Hedges) trying to recover with the help of his tenacious mother (Julia Roberts). Hedges wrote the role specifically for his son, and the pair make a formidable team. The elder Hedges is an alumnus of the North Carolina School of the Arts in Winston-Salem (his film debut, Pieces of April, was the first film I reviewed as a professional reviewer for the Teen Page in The Dispatch way back in 2004), and has made a career out of modestly scaled dramas with a strong emotional core. Even his Disney film, The Odd Life of Timothy Green, while not a major success for the studio, is a surprisingly intimate drama, wearing its sentimentality on its sleeve to great success.

Ben is Back is perhaps less sentimental than Hedges' more recent work, but no less effective. Ben's full history is never really known. We know he's a recovering addict, that his past is full of dark skeletons, and that his mother is the only person who has faith in him. When he shows up at their door just before Christmas, it threatens to put a rift in the family - but his mother refuses to turn him out. Even as his past begins to catch up with him, she resolves to stand by his side, even when Ben's old friends start getting frighteningly close to her family.

Ben may be the focus of the film, but ultimately the emotional center is his mother. Roberts delivers one of her finest performances yet as Holly Burns, a ferocious mama bear who exudes a kind of stalwart resolve through her vulnerability. Roberts manages to seem both strong and fragile, a mother out of her depth still determined to do anything she can to save her son from the nightmare of addiction. Hedges is equally strong - an air of hopelessness radiates off him, a desire to get clean coupled with an innate need to pursue his next fix. That's perhaps the strongest aspect of Ben is Back  it's an ultimately uplifting story about how far a mother will go to save her son, but even though it ends with a glimmer of hope, there's still the nagging sense that this is far from over, and that the cycle is only beginning again.

Peter Hedges' understated style keeps the film from slipping into melodrama. Roberts and Hedges' performances are so natural and lived in, the screenplay so unassuming, that it invites us into its world and takes us along for the ride. It doesn't have anything new or particularly profound to say about addiction, but its illustration of its cyclical and sometimes inescapable nature is gracefully rendered, exploring how society tacitly enables destructive behavior in the name of trying to discourage it. Ben is Back examines drug addiction's human toll without coming across as sanctimonious or sensationalized - it's simply a story of two people trying to fight an inner young man's seemingly invincible inner demons.

Come for the performances, but stay for the sensitive rendering of the struggle of drug addiction. It's not always an easy film to watch, but Hedges deftly finds the humanity and ultimately the silver-lining created by unconditional love. It appears in every gesture of Roberts fully realized and deeply grounded performance, a marvel of restrained emotion that provides Ben is Back with a wrenching and poignant backbone that is hard to shake.