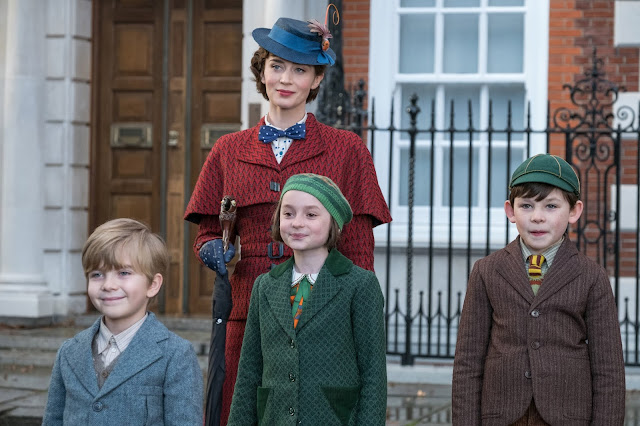 It's been over 50 years since we last saw Mary Poppins on screen in 1964. Perhaps one of Walt Disney's most beloved classics, Mary Poppins has entered into the popular lexicon in a way few films ever have. With Disney's current penchant for raiding its own back catalogue for sequels and remakes, it was perhaps inevitable that they should eventually return to Poppins, despite the fact that original star Julie Andrews is now too old to reprise the ageless role in a direct sequel. 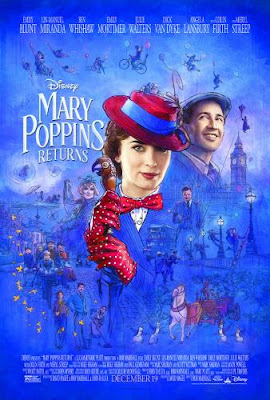 So the studio turned to Emily Blunt, who capably (but not completely) fills Andrews' prim shoes as the titular magical nanny. Set some thirty years after the original film, Rob Marshall's Mary Poppins Returns finds Mary returning to the London home of the Banks family, where widower Michael (Ben Whishaw) now lives with his three children, and his sister Jane (Emily Mortimer). A series of bad financial decisions has put the Banks family on the brink of losing their home, and unless they can locate their father's bank shares by the end of the week, they'll lose the Banks house.

Naturally, Mary Poppins comes to the rescue, along with lamplighter Jack (Lin-Manuel Miranda), leading the family through a fun-filled romp that teaches them all to let go and recapture their childhood. The film follows a very similar trajectory as its predecessor, very carefully replicating original musical numbers with new songs that are far less memorable. "Can You Imagine That" is the new "A Spoonful of Sugar," "The Royal Doulton Music Hall" replaces "Supercalifragilisticexpialidocious," "Trip a Little Light Fantastic" stands in for "Chim Chim Cher-ee," "Turning Turtle" is another silly supporting character sidebar much like "I Love to Laugh," and "Nowhere to Go But Up" is the modern answer to "Let's Go Fly a Kite." Yet for the most part, it all feels like reheated left-overs, never able to recapture the original film's simple magic. It hews so closely to the plot and structure of the original film that it is never able to establish any sort of personality of its own, or really any reason for existing in the first place.

No other studio is quite so adept at weaponizing nostalgia as Disney. But the formula is starting to feel tired. Mary Poppins Returns follows very similar thematic territory to the studio's other belated 2018 sequel, Christopher Robin, yet that film managed to handle ideas of recapturing childhood with greater care. By contrast, Mary Poppins Returns feels overstuffed, brimming with elaborate musical numbers and grand production design, but never really goes anywhere. Even the appearances of Dick Van Dyke (reprising his role of the bank manager from the original film) and Angela Lansbury in the film's final 20 minutes can make up for the lackluster quality of the preceding two hours.

Van Dyke and Lansbury are naturally the highlights of the film (sending the film off in a wistful sense of whimsy it had been sorely lacking up to that point), and the film does manage to pick up steam after its climax (which makes the mistake of arriving the obvious solution to the problem at hand after quite a bit of superfluous suspense), but the whole affair is so listless that its manufactured joy never feels genuine or particularly magical, bludgeoning the audience into submission with its nostalgic cheerfulness rather than with the graceful touch that made Christopher Robin so endearing. Moments of inspiration (the lovely animated sequence mid-way through, Meryl Streep's wacky cameo, David Warner as an ancient Admiral Boom) are then drowned by director Rob Marshall's busy and overstuffed musical numbers that have the spirit but none of the wonder of the original Mary Poppins. It's a film that's been focus-grouped within an inch of its life, immaculately designed to follow its formula to the letter without offering any surprises or any real warm and fuzzy recollections of its predecessor, unless it's to wonder why you're not just watching the original film instead.